Home Politics Delta 2023 Guber: Give me your mandate and I will listen more... 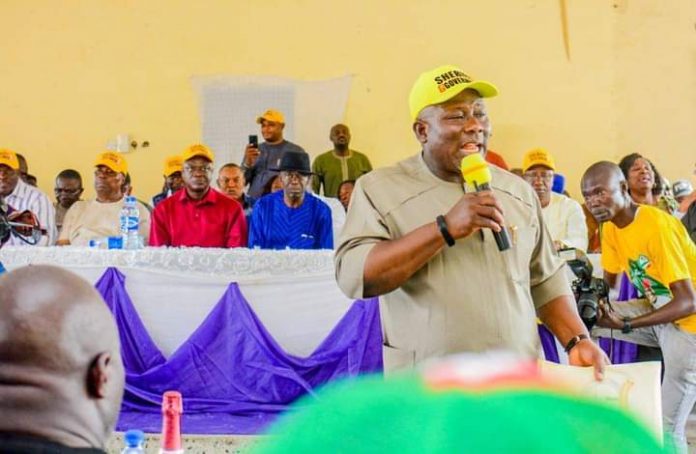 Delta 2023 Guber: Give me your mandate and I will listen more and do more!

Frontline PDP Gubernatorial Aspirant in Delta State, Rt. Hon. Sheriff Oborevwori alongside some Leaders and members of PDP across the State who believe in his “MORE AGENDA” and his capability and ability to serve Delta State as Governor, were in Ethiope East, Ughelli North and Ughelli South Local Government Areas to consult with Leaders, Stakeholders and Delegates on his gubernatorial pursuit.

The consultation visit which was carnival-like, witnessed large turnout of PDP faithfuls/Delegates in the LGAs visited. PDP political heavyweights and their supporters welcomed the Ukodo of Okpe Kingdom (Sheriff Oborevwori) and his team to their domains with open arms.

In all the LGAs visited, the leaders and Delegates, without any air of equivocation prayed for him and assured him of their unflinching and genuine support towards the realization of his political pursuit.

Rt. Hon. Sheriff Oborevwori in his speech to his Hosts in the LGAs visited, stated amongst other that he had mouth savouring programmes for the growth and development of Delta State which he outlined in his manifesto. He promised to listen more and do more for the good of Deltans. Oborevwori further promised to continue the good works, the Governor of Delta State, His Excellency, Sen. Dr. Ifeanyi Arthur Okowa is doing for the development of Delta.

Oborevwori gave his assurance to all present that he was going to be a Governor for all Deltans irrespective of tribe, religion and political leanings. According to him, the voices of the people shall guide him at all times in his dealings, and he would make all Deltans proud.