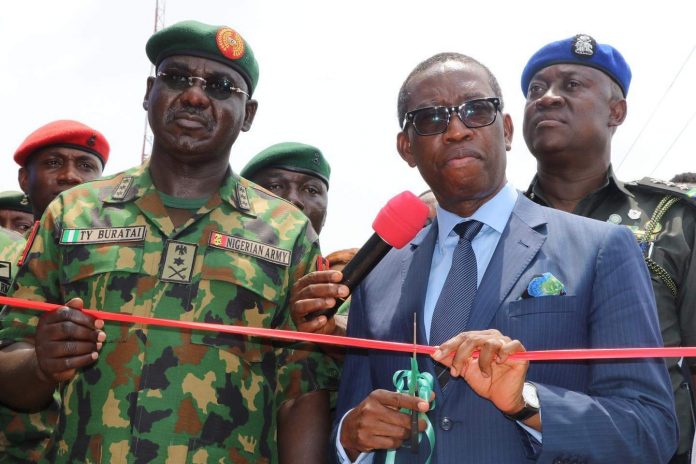 Delta State Governor, Dr. Ifeanyi Okowa has urged the Nigeria army and other security agencies to intensify efforts in resolving the frequent dispute between farmers and herders across the state.

Governor Okowa disclosed this in Asaba during the official inauguration of the Headquarters 63 Brigade, Nigeria Army.

The Governor who commended the Nigeria army for their cooperation with other security agencies in tackling security challenges in the state also lauded them for their efforts at transforming the Brigade Headquarters.

“I must truly thank the Chief of Army Staff for bringing this Brigade to Delta. We used to be supervised by the Brigade in Benin and we were excited when we heard of the approval for a Brigade in Asaba.

“We have had a very warm relationship with your officers here and that of the 6 Division.

“As a state we take security matters very seriously even as we meet twice a month.

“Your officers have cooperated with other sister security agencies and that has helped us in achieving the peace we enjoy in the state.

“Delta is peaceful today, though we have had few incidences that makes us sad but with all hands on deck we will surmount all the security challenges.

“We will continue to support the army and other security agencies in the state as much as our finances can carry.

“We still have security challenges such as farmers-herders clashes and kidnapping which obviously was going down but we still have a lot of work to do even though we are already working hard and we do hope that the cooperation we have in the past will continue,” he added

Chief of Army Staff, Lt Gen. Tukur Buratai said the establishment of the 63 Brigade Nigeria Army is not a coincidence but well thought out in view of the strategic role of the state in the economy of the country.

He said he was glad to have personally come for the inauguration of the headquarters which was provided by the Delta State Government.

“Let me express my profound appreciation to the Governor of Delta, Senator Dr Ifeanyi Okowa for the donation of this headquarters.

“The establishment of this headquarters is the first critical step in the full operationalisaion of the Brigade.

“I am aware of the critical support of the government and people of Delta to the success of this Brigade and such support had engendered good civil-military relations in the state.

“Your donation and funding of this headquarters has shown that there is good understanding of the role of security to the development of any state,” he said

Highlight of the ceremony was the presentation of Certificate of Occupancy of the Brigade Headquarters Complex to the Chief of Army Staff and a guided tour of the complex. 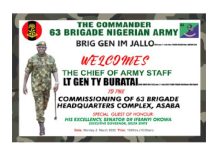