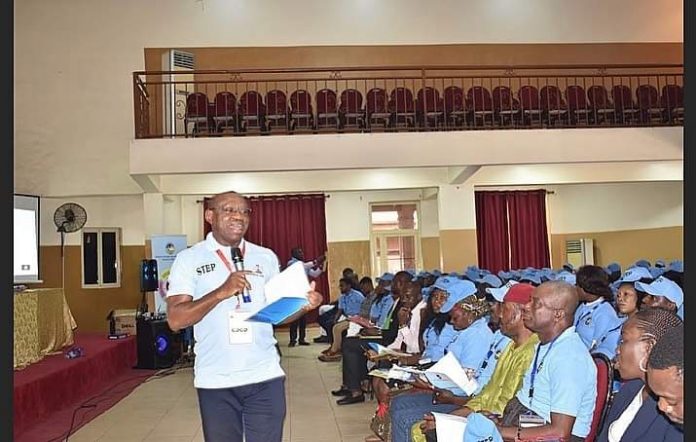 Since assumption of office as the 4th democratically elected Governor of Delta State on May 29, 2015, Sen. Dr. Ifeanyi Okowa has declared job creation and youth empowerment as the center of his policy thrust. Thus, one of the Governor’s first move in the governance of the state was to establish a Special Purpose Vehicle, SPV called the Job Creation Office under his supervision, with a mandate to manage the programme and equip the participating youths with vocational skills and start-up packages to make them self-employed. And as early as the 26th of August the same year, the first batch of trainees were inaugurated.
Many analysts believe this policy direction was perhaps motivated by the challenges of youth restiveness during the early days of the Okowa administration. This was evident in the widespread kidnappings and pipeline vandalism that threatened the Big Heart of the Nation and rattled the Nigerian economy which is largely dependent on oil revenues.

Today normalcy has returned to the area and Delta State enjoys a favorable social and economic climate. However, the army of entrepreneurs borne out of the Job Creation scheme has continued to thrive in leaps and bounds and the skills empowerment initiative has turned out to become a model for state intervention efforts in the attempt to maneuver the double edge sword of overdependence on oil and the task of youth employment.
The recent induction of more than eight hundred trainees into the scheme will bring the total number of beneficiaries of the program to more than five thousand youths (5,000) who have been trained and established under the SPV scheme. The scheme runs in two categories – the Skills Training and Entrepreneurship Program, STEP designed to build entrepreneurs in the services and manufacturing industries such as Fashion Design and Textile Design; Cosmetology; Hairdressing, Makeover and Braiding; Production of Cleaning Agents; POP, Painting and Screed-Making; Interlocking and Tiling; Welding and Fabrication; Catering and Confectionary; Information Technology Services, Audio-Visual Services among other skills. On the otherhand, the Youth Agricultural and Entrepreneurs Programme YAGEP is intended to train beneficiaries in agricultural enterprises like Crop Production, Fish Production, Poultry and Piggery.
The programme is now in its fifth consecutive cycle and has produced many gradaunds who have emerged to become important players in the business sector, with some of them engaging up to twenty staff under their employment. And others have won national recognition for their contributions to the state and national business environment.

It will suffice to note that statistics have shown that the output from this new crop of entrepreneurs contributed towards the economic growth projection of the state from 8.9% from 2013-2015 to 13.2% from 2015-2017 according to reliable data. Also, the agricultural sector witnessed an upward growth of 6.3% reaching 13.3% growth rate within the same period.
Another key feature of the Delta State Job Creation Scheme is the social inclusiveness which is reflected in gender sensitivity in selection. Females make up 47% of the total number of beneficiaries. This is coupled with the reservation of slots for persons with disabilities, PwDs.
Also, the beneficiaries are spread over various educational qualifications: 43% are BSc. and HND holders, while those with West Africa Examination School Certificate and Senior School Certificate Examination category make up 41%. In the same vein, others with OND and NCE certificate make up 16%.
Above all, the job creation scheme in Delta State has triggered a generation of entrepreneurs in the state, especially with the development of farm clusters managed by beneficiaries and grandaunts of the YAGEP initiative leading to the advancement of modern agricultural practices in the state.
The scheme also has a monitoring and mentoring mechanism through the establishment of an agency called the Directorate of Youth Monitoring and Mentoring to ensure the sustainability of the enterprises.
Similarly, the private sector involvement in the training of beneficiaries has led to the growth of micro, small and medium enterprise MSMEs. This is because through their partnership with the Job Creation Office, many MSMEs have been able to upgrade their business and managerial capabilities leading to the overall development of the private sector in the state.
In all, the rise of the new breed of entrepreneurs and their multiplier effects on the economy cannot be overemphasized, together with the proven determination of the State Government to sustain the scheme as its flagship for a stronger Delta. Therefore, it could be said that efforts to create a league of entrepreneurs to drive economic diversification is truly and well underway in Delta State.