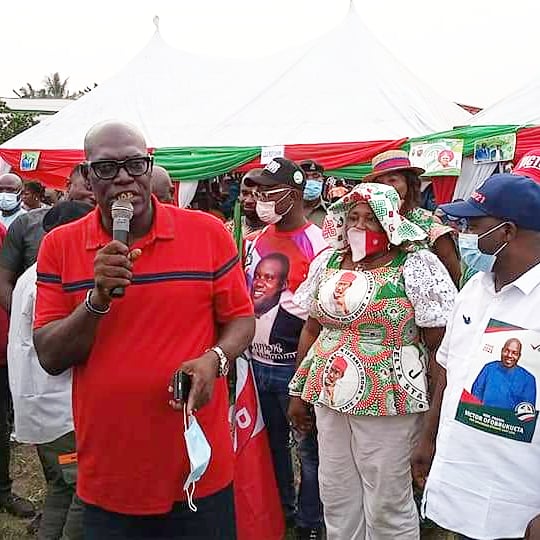 Chairman of Delta State Chapter of the Peoples Democratic Party, PDP, Okakuro Kingsley Esiso, attended the grand finale of the three days electioneering campaign tour by Ethiopie East PDP, to drum up support for the victory of the party and her council election candidate, Pharmacist Ofobrukueta Victor and 20 councillors.

Esiso said PDP is the only visible party in the state and will be victorious because of her level of solid preparations for the 2021 council election, and more importantly, because of the fact that the state Governor and leader of the party in the state, Senator Dr Ifeanyi Arthur Okowa, consistently fulfilled his electioneering promises to the people and will continue to do so till the end of his governorship tenure in 2023.

He said the good works of the Okowa administration is visible across the three senatorial districts, urging all eligible voters in the state to vote for PDP Chairmanship candidates and councillors, adding that the party deliberately ensured that women became Vice Chairpersons of councils, so as to further encourage more women and young female adults to develop careers in politics and public service.

Esiso described Ethiope East 2021 Council chairmanship candidate, Ofobrukueta as a promising political leader who by divine intervention emerged as the party’s preferred candidate at a time the council needed a visionary technocrat and team player to positively turn around the fortunes of the council and the people, create jobs and wealth through expanded agricultural programmes, skills acquisition and vocational training for teeming youth of the council areas, in line with Governor Okowa’s Stronger Delta Agenda.

He assured the good people of Ethiooe East that Ofobrukueta will not disappoint them because of his good track records of stewardship; first as Supervisory Council for Health and later as the leader of the legislative arm of the council during Chief Mrs Faith Majemite administration, for a period of six years.

Esiso applauded the LGA PDP Campaign Committee chaired by Hon Felix Ejovwoke Erhimedafe, with Prof Nyerovwo Tonukari as Director General, for a job well done and extended his profound gratitude to party leaders, chieftains and party faithfuls, for their hard work while the campaign lasted.

Earlier, the PDP council chairmanship candidate, Pharmacist Victor Ofobrukueta disclosed that he hails from both Agbon and Abraka Kingdoms by virtue of his unique cross breed, pointing out that his mission is to ensure unprecedented infrastructure and socioeconomic development of the council areas during his tenure as Chairman of council.

He asserted that his “Grace Team, comprising the Vice Chairman, Mrs Patience Ejor and the 20 councillors, will embark on agriculture revolution in partnership with farmers cooperative societies, develop the tourism potentials of the council areas to create jobs and partner with the State Bureau of Job and Wealth Creation, so as to sponsor Ethiope East teeming youth in skills acquisition and vocational training programmes like never before since the creation of the council.

He assured Ethiope East women of their prime place and partnership during his tenure in line with the state Governor’s expanded roles for women in politics and leadership across board. Ofobrukueta got unprecedented loud and standing ovations from across the 20 DESIEC Ward, especially at his paternal home town, Okurekpo-Okpara.

The highlight of the campaign grand finale was the defection of a large number of the All Progressives Congress, APC, to PDP. They gave bad governance by the APC national government, lack of visionary leadership in their former party and the absence of internal democracy in APC Delta, among other reasons for their deflections to PDP.