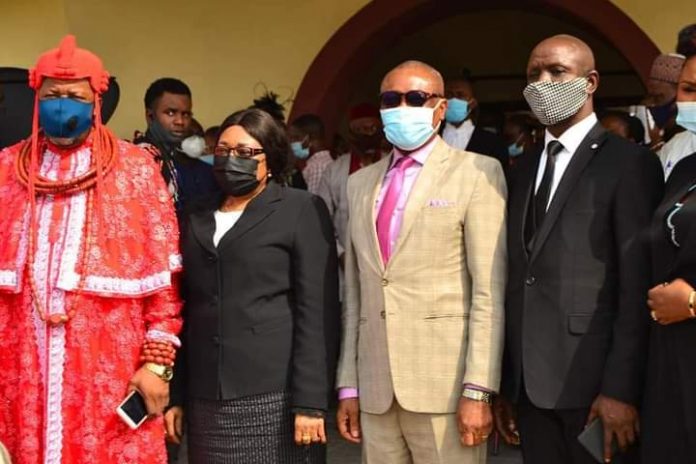 Justice of the Peace, JP, and Executive Assistant to the Governor of Delta State on Communications, Dr Barr. Fred Latimore Oghenesivbe has expressed profound gratitude to his boss the Governor, Senator Dr Ifeanyi Arthur Okowa, over his appointment, and successful swearing in by the Chief Judge of Delta State, Honourable Justice Marshall Umukoro, saying that Okowa administration has been a tremendous blessing.

The EACGOV told newsmen at the High Court 2 premises in Asaba, venue of the Oath taking ceremony in Asaba, that he received twelve (12) prestigious awards in five years, he was admitted by three international professional bodies as full member, and three national institutes as a fellow, participated in four state sponsored capacity building programmes in strategic communication, became more active in grassroots politics, broadened his horizon in media politics and strategic communications, and now conferred with the office of the Justice of the Peace, JP.

He noted that actual and genuine success in life is not only tied to fat bank accounts and material things as some people are made to believe, but that it also entails proper and effective utilization of acquired knowledge, maximum utilization of professional skills, awards and recognition by governments and credible organisations.

Oghenesivbe disclosed that the Okowa administration sharpened his communication skills, which is why he has been able to add inestimable values to the projection and strategic articulation of government policies and programmes.

He said the state governor has done extremely well in peace building, provided tremendous logistics to enable security agencies function more effectively in the state, and have also gone ahead to additional 53 Justices of the Peace, to assist government to resolve minor disputes, suppress riots, issue search warrants and to carryout other essential quasi judicial functions in various communities across the state.

“The governor’s remarkable performance in peace building and security in the state is worthy of commendation and emulation. Justices of the peace have enormous roles to play in assisting the governor and the judiciary as officers of Courts to promote peace and justice; especially in the area of Alternative Dispute Resolutions, ADR, compel appropriate person(s)to appear as witness in court, and to assist the courts to ensure that justice is not only served but seen to have been served in all cases, adding that he will abide to the Oath of Office and Oath of Allegiance as a JP.

“I thank my boss the Governor for yet another appointment and this time as a quasi judicial officer, to assist the judiciary and government to promote and achieve peaceful coexistence in the state.

“I must not fail to thank the Honourable Commissioner of Justice and Attorney General of the State, Peter Mrakpor, SAN, my Lord the Chief Judge, Honourable Justice Marshall Umukoro and the Secretary to the State Government, SSG, Chiedu Ebie, Esq for the various roles they played to drive the process to fruition.

“As a Barrister at Law and Justice of the Peace, I will do the needful whenever the need arises, and to use my office appropriately as directed by the Governor and my Lord the Chief Justice, to promote peace and justice in my community and in the state” Oghenesivbe assured.