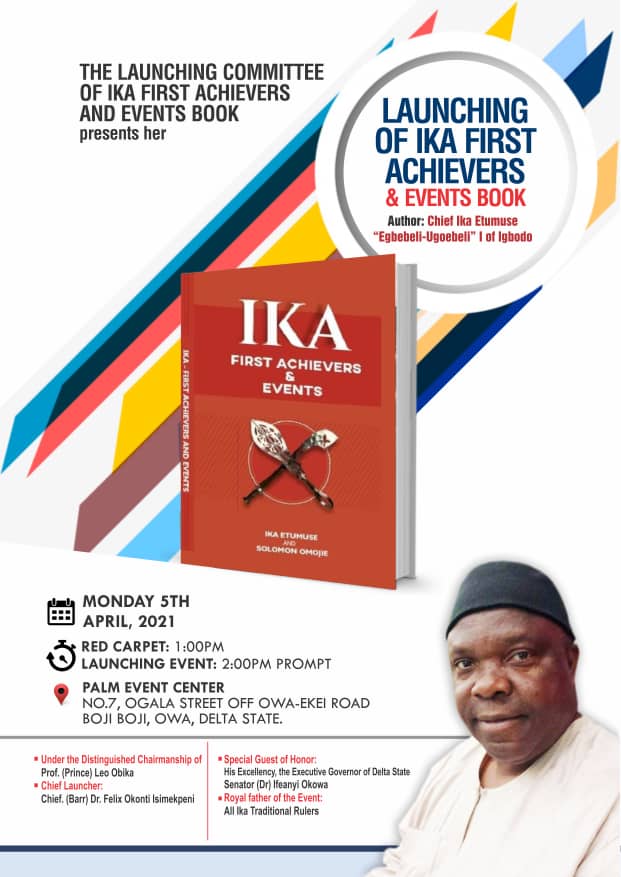 A statement by the organizers, says the launch of the book, Co – authored by Solomon Omojie, will hold at Palm Event Center, 7 Ogala street, off Owa – Ekei road, Boji – Boji Owa, at 1pm for Red Carpet and 2pm for the launch.

The Delta State Governor, Senator (Dr) Ifeanyi Okowa, will be Special Guest of Honour at the occasion, which has all Ika traditional rulers as Royal Fathers of the Day, while Professor Leo Obika will chair the ceremony.

Ika Etumuse, who is the ” Egbebeli – Ugoebeli ” 1 of Igbodo kingdom, in Ika North East local government area, has two other literally works to his credit : The History of Igbodo and The Journey of Life.

The US based philanthropist told Correspondent in a telephone interview, that all notable sons and daughters of Ika Nation are expected at the historic event, which will also feature various forms of entertainment and display of rich Ika cultural heritage.

Chief Etumuse explained that Ika First Achievers and Events, is a compendium of Ika first in various feild of human endeavors.