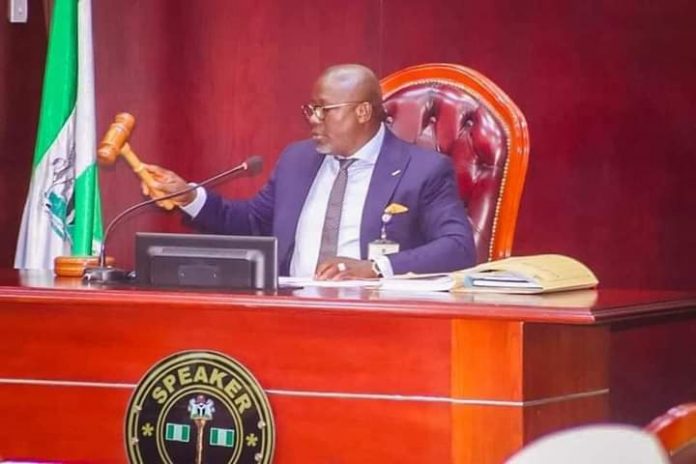 The Speaker of the Delta State House of Assembly and State PDP Governorship Candidate, Rt Hon Sheriff Oborevwori has congratulated the State Governor, Senator Dr Ifeanyi Okowa on his emergence as the running mate to the PDP Presidential flagbearer, Alhaji Atiku Abubakar just as he expressed gratitude to all and sundry for celebrating his victory at the PDP Governorship Primary and his birthday.

In his opening remarks and congratulatory message on resumption of plenary on Tuesday, June 21st, 2022, the Speaker recalled that on Thursday, June 16th, 2022, Governor Okowa emerged as the running mate to Alhaji Atiku Abubakar.

“Dear Colleagues, on Thursday 16th June, 2022 our dear Governor, His Excellency Senator Dr. Ifeanyi Okowa, emerged as the Peoples Democratic Party, PDP Presidential Running Mate to Alhaji Atiku Abubakar, the PDP Presidential candidate in the 2023 general elections. On behalf of the Delta State House of Assembly, and from the Chair, I wish to formally congratulate His Excellency, Senator Dr. Ifeanyi Okowa, for his emergence as the Vice-Presidential Candidate of our great party, the Peoples Democratic Party, PDP, in the 2023 general elections”, he said.

The Speaker, who is also the National Deputy Chairman of the Conference of Speakers of State Legislatures of Nigeria added that; “We are grateful to the Leadership of the party ably led by the National Chairman His Excellency, Distinguished Senator Dr. Iyorchia Ayu, the National Working Committee and all the Leaders of the Party for the nomination of our hardworking Governor, His Excellency, Senator Dr. Ifeanyi Okowa as the Vice-Presidential Candidate of the Peoples Democratic Party, PDP. Once again, congratulations to our dear Governor”.

According to him; “Distinguished Colleagues, good morning and welcome to today’s plenary. On behalf of my family, I sincerely wish to thank you all for joining me on Sunday 19th June, 2022 to thank God Almighty for my nomination as the Governorship candidate of our great party, the Peoples Democratic Party, PDP, and for the celebration of my birthday anniversary”.

“I thank most especially my dependable Majority Leader who led other Members to join me in the celebration. May I also extend my depth of gratitude to everyone that came to celebrate with me and my family. Thank you for your wishes and prayers. God bless you”, he added.

Sheriff Oborevwori: The Pan Delta Governorship Project For All Deltans.