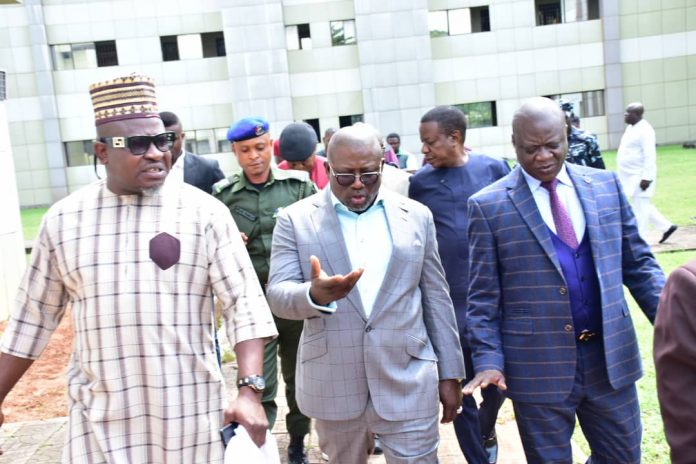 Hardwork, dedication to duty, transparency, accountability and integrity are great virtues of a servant leader.

This were the words of the Member Representing Ughelli South Constituency in the Delta State House of Assembly, Hon Reuben Izeze, while reacting to the Tuesday’s confidence vote passed on the Speaker, Rt Hon Sheriff Oborevwori and his leadership by members upon resumption of plenary after four weeks vacation.

Hon Izeze who is bereaved following the demise of his father, Pa Godwin Clement Izeze, said Rt Hon Oborevwori possessed all the virtues of a great leader, saying that the vote of confidence on him was well deserved.

“Even though I was unavoidably physically absent, I totally align with the submissions of my colleagues. The Rt Hon Speaker has indeed earned the implicit confidence of his peers in the House”, Izeze stated in an sms to Correspondent in the State Legislature.

“Mr Speaker is very passionate about the welfare of everyone around him. He sees himself as the first among equals and accord members their respect. The peace and stability you see in the Assembly is as a result of a sound coordinated leadership. For five years now, no rumour of impeachment and there will be non till the end of the Seventh Assembly.

“Even staff of the State Legislature can eloquently testify on the leadership style of Mr Speaker. He won’t eat your money. He attends to all issues brought before him. Very accessible by everyone. So emotionally attached to the welfare of others. I can go on and on about the sterling leadership style of Mr Speaker. Undoubtedly, I must say that Rt Hon Sheriff Francis Oborevwori who is today the governorship candidate of PDP in the 2023 general elections has earned a lot of respect and integrity for himself”, Izeze said

The Lawmaker who is the Chairman, Assembly Committee on Lands, Survey and Urban Development felicitated with the Speaker, the PDP and Deltans on the Appeal Court victory that affirmed the Rt Hon Sheriff Oborevwori as the candidate of PDP in the 2023 governorship race in Delta state.

Izeze described the victory as a victory for all members of the PDP in Delta State as there was no victor or vanquished.

He therefore appealed to aggrieved leaders and members of the party to sheath their swords and join forces together to clinch victory for the party in the forthcoming general elections.