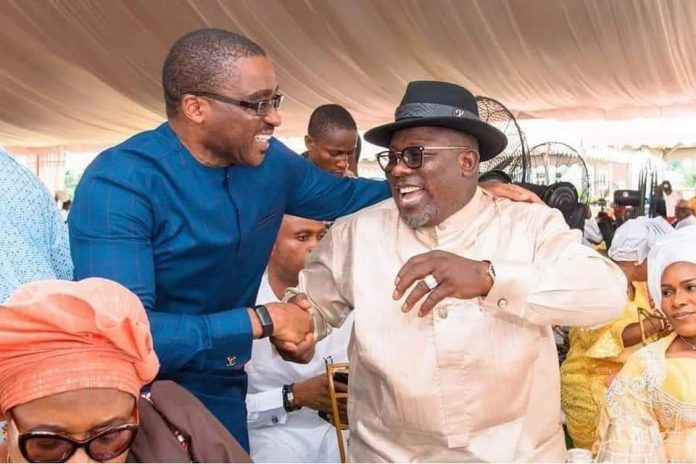 Oghenesivbe, who is also the leader of the Sheriffied Delta Media Group, made the assertion while answering questions at a live political programme on Wazobia FM Onitsha in Anambra State on Friday, saying that Edevbie must of a necessity as a loyal party man throw in the towel and wholeheartedly accept the candidacy of Rt Hon Sheriff Francis Orohwedor.

He said the Appellate Court in it’s wisdom resolved all the legal lacunas surrounding the Federal High Court’s ruling, making it very easy for respondent Edevvie and his legal team to appreciate the sound judgment which was delivered by Justice P. O. Ige, JCA in favour of the Appellant Oborevwori.

Okowa’s EAC told his heterogeneous audiences via Wazobi FM Radio that the State Governor and PDP Vice Presidential candidate, Senator Dr. Ifeanyi Arthur Okowa, was neutral in all the processes leading to the party’s governorship primary, which obviously ensured a free, fair and credible primary, adding that Oborevwori, being the most popular and generally accepted aspirant polled 590 votes to emerge as Delta PDP governorship candidate, defeating Respondent Edevbie who scored 113 votes.

Oghenesivbe further posited that the Court above was clear in its judgment on the legal defects visible in Justice Taiwo’s ruling, on the grounds that in criminal jurisdiction the proper and correct process is the Writ of Summons which enables witnesses to be called, and in the instant case of alleged certificate forgery and fake certificates; the issuing authority has the final say as to the authenticity and originality of the certificate and to whom it was issued.

“The sound judgment of the Appellate Court addressed all the grey areas in the lower Court’s ruling, to the extent that the layman appreciates the distinctions in Court processes and how criminal matters are properly scrutinized to avoid miscarriage of justice.

“It is grossly counter productive for a Court of competent jurisdiction to resolve grave criminal allegations of certificate forgery, impersonation and document fraud based on mere deposition of Affidavit and surface value analysis of the certificate without recourse to the issuing authority. Never!

“The recent authority is Osagie Ize-Iyamu v Godwin Obaseki, where the Supreme Court relied heavily on the averment of the issuing authority, the University of Ibadan.

“The Appellant was sued in his proper and correct name; Oborevwori Sheriff Francis Orohwedor, the same name Respondent Edevbie faulted but failed abysmally to prove his criminal allegations beyond reasonable doubt as required in criminal jurisdiction.

“The Appellate Court dwelled on all these lacunas, resolved same and concluded that the lower Court was not reasonably and logically correct in it’s ruling and subsequently set aside Justice Taiwo”s orders against the credible and valid candidacy of Oborevwori Sheriff Francis Orohwedor of the Peoples Democratic party, in Delta State.

“I am pretty sure that our dear brother and former governorship aspirant, Olorogun David Edevbie, will not proceed to the Supreme Court as a loyal party man, a man of good conscience, and for the fact that it amounts to further waste of scarce financial resources, considering the huge sums of money involved in engaging top legal team for Supreme Court appearances over a matter that had been properly resolved by the Appellate Court.

“The 1st Respondent did not call any lucid or credible evidence to support the serious and grave criminal allegations made against the Appellant to justify the invocation of the consequences of Section 29(5) & (6) of the Electoral Act 2022.

“There was/is no evidence from any of the institutions that issued the said educational certificates and results disclaiming any of the certificates relied upon by the Appellant to seek election to the Office of the Governor of Delta State.

“A situation where the 1st Respondent as Plaintiff did not find it necessary or bothered to inquire from all the institutions and Registry of Courts as to whether or not they issued those certificates or documents and to who were they validly issued, whether to the Appellant or other persons is a complete failure to discharge the onus on the 1st Respondent to prove beyond reasonable doubt the allegations of forgery and faking of documents against the Appellant.

“The Forged documents and their originals must be produced by the 1st Respondent in order to discern which are the originals or authentic certificates and how they were forged. It must be established that the Appellant indeed forged those documents and certificates listed by the 1st Respondent is his Affidavit in Support of the Originating Summons.

“The 1st Respondent failed to prove or establish by the Affidavits evidence before the lower Court the owner of those educational certificates and other documents aside the Appellant who claims the ownership of the documents.

“The 1st Respondent is under a bounden duty to produce the originals of the credentials or certificates claimed by the Appellant as belonging to him and the forged documents and certificates before the lower Court.

“That is not all. He failed to prove that the Appellant actually forged or faked any of the documents or certificates attached to the alleged false Affidavits.
Further on the allegations of the 1st Respondent that the Appellant laid claims to various certificates that do not belong to him and contained different and varied names all of which the 1st Defendant now Appellant now fraudulently seeks to ascribe to himself in a chameleonic manner, the 1st Respondents failed to prove any of the allegations that those names do not belong to the Appellant.

“The 1st Respondent failed to prove that those names do not belong to the Appellant merely by the arrangement of the names or the person bearing the names apart from the Appellant.

“The 1st Respondent did not prove or establish to which advantage the names have been used over the 1st Respondents right to contest and other Aspirants who participated in the PDP’S Primaries to elect its candidate for Delta State Governorship Election of 2023 which the Appellant won.

“The lower Court decision in favour of the 1st Respondent is perverse…” Justice P.O. Ige.