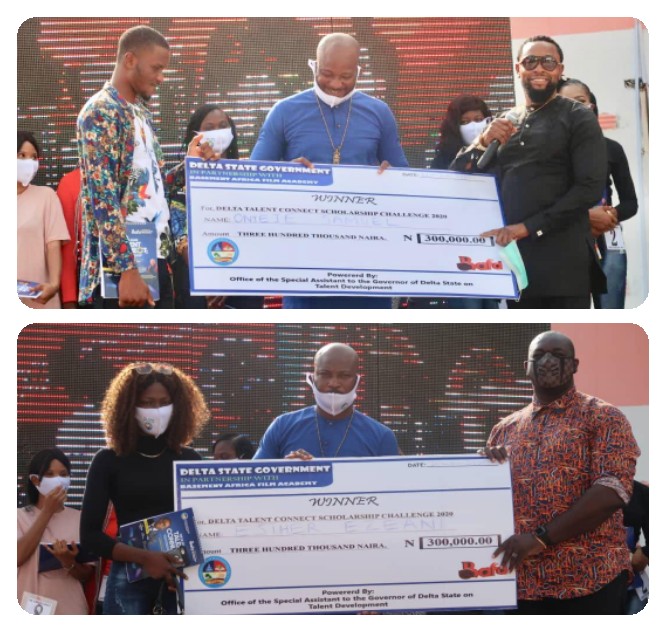 By Omizu Austin-Asaba: As part of efforts to compliment effective funding of education across all levels as well as human capital development of Governor Ifeanyi Okowa’s Stronger Delta Mantra, the Special Assistant to the governor on Talent Development, Mr. Dave Ogbeni, has awarded scholarships to two Delta youths to study film making at the Basement Africa Film Academy in Asaba, Delta State.

Mr. Ogbeni awarded the scholarship at the grand finale of Delta Talent Connect 2020, a talent development scholarship programme for Delta youths, aimed at the actualisation of the STRONGER Delta Agenda. The programme  organized by his office saw Onyeje Samuel emerged the winner and Esther Ezeani the second runner up at the end of the contest .

The event attracted top government functionaries, Nollywood actors and actresses, filmmakers, comedians, among others. During the programme all necessary protocols of the Coronavirus Pandemic were strictly adhered to.

Mr Ogbeni stated thus, “I am inspired by the past years of the Governor Okowa Administration as Deltans. I have witnessed unprecedented transformation in all sectors of the state economy”. Continuing, he maintained that “the adminstration has brought about positive developments in the state which includes the ongoing construction of the film village in Asaba, the industry needs our support as individuals to motivate young talents to discover their hidden potentials. Government can not do it all, we all need to invest in the system”, he said .

Still on the film village, the Delta born Nollywood Star explained that Governor Okowa’s approval of the establishment of the film village would definitely ensure the ease of shooting movies by filmmakers, adding that the intensive cost and technical challenges in shooting films would also be reduced drastically .

He said that the establishment of the film village would compliment the job and wealth creation drive of the state government under the watch of Senator (Dr) Ifeanyi Arthur Okowa as Governor of the state.

“Undoubtedly, as the industry is rapidly growing, there is an urgent need for a viable film village in Asaba to house all equipment, both human and material resources, everything needed for film-making , particularly now that Asaba is fast becoming the hub of Nollywood movie production”, Ogbeni added.

He expressed delight that the film village would boost the morale of actors, actresses as well as others involved in movie production.

He reemphasized that “It will save cost for us the filmmakers, because aside the security challenges, transporting our cast and crew from one location to another is very expensive.”

He pointed out that such a world class proposed facility by the pragmatic governor of the state would offer necessary cutting edge technology and set needed for the production of international standard movies under one roof and at a subsidised rate.

When completed, “it will house all the various aspects of entertainment productions, such as film making, editing, recording studio, among others. It could be compared to the New York Film village”, Ogbeni added.

While offering the scholarships, Mr Ogbeni urged the students to remain focused, adding that with entertainment the future would be bright.

“The scholarship would no doubt spur the winners of the contest to attaining their acting skills and become national and international actor and actress, but they should not allow fame to overwhelm them, as fortune has already started to smile at them. I promised to sustain the gesture,” Obgeni stated.

“I will not stop helping the young talented Delta youths as long as I am in the position to help them. It gives me joy, helping those who are in need. The scholarship is in line with Governor Okowa STRONGER Delta Agenda of putting smile on the faces of Students and Deltans at large”, Ogbeni revealed .

He commended Governor Okowa for giving him the appointment to serve in the state government, and promised to go in search and nurture youths on talent developments across the state, towards retaining the state as the entertainment hub of the country.

Winners of the event, Onyeje Samuel and Esther Ezeani , extolled Dave Ogbeni, just as they implored other youths in the state and beyond to discover their God given talents to better their lots.