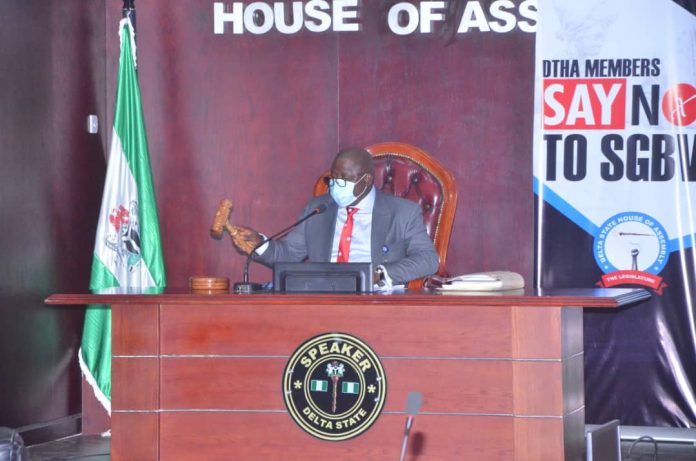 The State House of Assembly, Tuesday, took the third reading of a bill to provide for public safety, detection and prevention of crimes in public places in the state.

The proposed law with the short title “Delta State Occupational Safety Bill”, was read the third time and passed following a motion to that effect by the House Leader, Tim Owhefere, seconded by the Member Representing Ughelli South, Hon Rueben Izeze and adopted.

The motion for the bill to be read the third time and passed came after an intensive work on it, at the Committee of the Whole, chaired by the Speaker, Rt. Hon. Sheriff Oborevwori.

Announcing progress after the legislative fireworks, the Speaker said members had carefully examined the bill from the long title to the last clause, stating that the amendments and contributions of members were very helpful in the consideration of the bill.

While commending his colleagues for their patience throughout the exercise and for ensuring that the bill was passed, Rt Hon Oborevwori explained that the proposed law was coming barely a week after the house passed the Delta State Community Security Agency Corps Bill.

He noted that the proposed law will help in strengthening the security architecture in Delta State and commended Governor Ifeanyi Okowa for his commitment to the task of securing the lives and property of Deltans.

He said the new law will certainly improved the security situation in the state.

The bill when assented to by the Governor, made it mandatory for owners or proprietors of any public place such as shopping malls, eateries, Cinemas, supermarkets, petrol and gas stations, private and public motor parks, event centers, Hotels, public and private offices as well as worship centers to install Smart Surveillance Cameras in such places.

The new law, will ensure that the cameras must be installed or mounted to capture the views from both inside and surrounding premises of the public place where it is mounted.

Also, footages of the camera shall be used for the purpose of crime detention and prevention, and shall henceforth be lawful for any owner of private residential buildings to install or mount any form of camera in his or her premises for the purpose of security surveillance, provided such camera is not projected to capture images or pictures from any room or building near or adjacent to the premises where it is installed.

The proposed law, prescribed a fine of N1 Million or a two-year jail term or both for any individual without legal authority to remove, destroy, redirect the position or tamper with a camera installed or mounted in any place.

It also prescribed that any owner or proprietor of a public place who fails, refuse or neglects to procure and install a camera shall be guilty of an offense and shall upon conviction be liable to imprisonment for a term of two years or a fine of N500, 000 and the premises shall be sealed up.

In the case of corporate body, such defaulting organization shall be liable to a fine of N500, 000 and sealing up of such premises until compliance with the provisions of the Law.

Any owner of private home or premises who uses the camera to take picture of any person for the purpose of intimidating, blackmailing or to cause any form of disrepute to such person, commits an offense and on conviction, shall be liable to one year imprisonment or N300, 000 fine or both.