Home News Ogba Calls For Active Participation Of Youths In Growing The Economy Of... 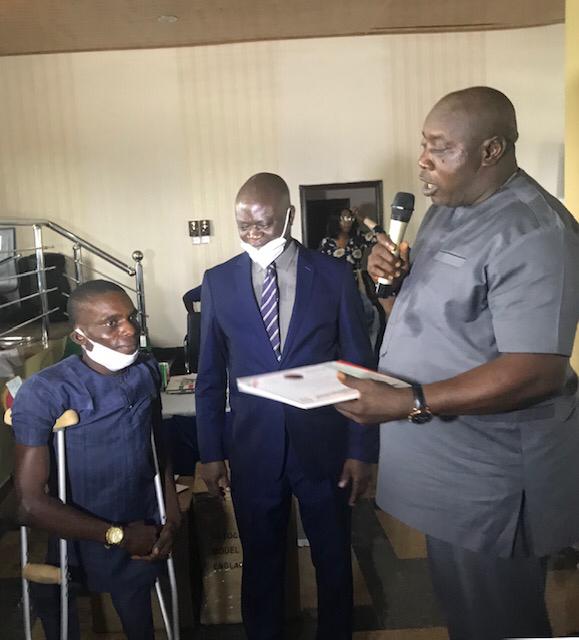 The Member Representing Isoko South One Constituency in the Delta State House of Assembly, Hon Kenneth Dafe Ogba has called for active participation of youths in growing the economy of the state.

Hon Ogba stated this while announcing a cash donation of point two million naira to a physically challenged in Isoko South, Mr Emmanuel Esume for participating in an agricultural empowerment program sponsored by the member representing Isoko South two in the State House of Assembly, Hon Ferguson Onwo.

The Lawmaker said Mr Esume is a source of encouragement to many, saying that the cash donation was his support to the young physically challenged to excel in his desire to becoming an entrepreneur in agriculture.

Hon Ogba who was part of top government functionaries that witnessed the presentation of certificates to thirty eight youths trainees and cheques to facilitators of Hon Ferguson Onwo’s empowerment program on agriculture, noted that Mr Esume could have taken to alms begging like some others, but was determined to succeed despite his condition.

He maintained that the disposition of Mr Esume to life further affirmed the truth in the popular saying that “There is Ability in Disability”, pointing out that there are abled bodied youths in the streets begging to feed instead of being focused.

Hon Ogba who is the Chairman, House Committee on Energy, congratulated the thirty eight trainees for their successful outing at the Bio-resources Development Centre, Odi, Bayelsa State, and commended Hon Ferguson Onwo for his commitment towards raising standard of lives in Isoko nation.

The Lawmaker said the youths have great role to play in advancing the economy of the state and enjoined all to take advantage of the various youths empowerment programs by the Okowa’s administration to become self reliance.