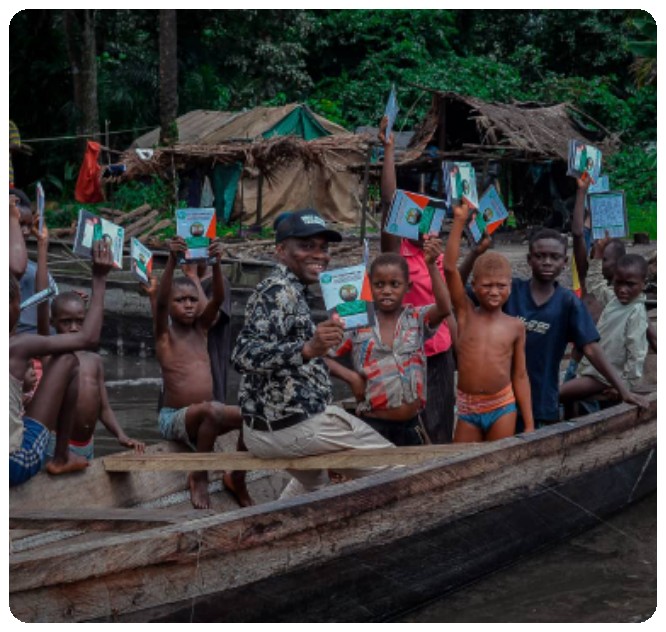 The fifth edition of the annual reach out program of Eric Igban foundation, a non governmental organization which focuses on communities in Niger Delta States, has ended with a promise never to relent in creating an enabling society for the future generations.

The President and Chief Executive Officer of the foundation, Dr Andrew Omagbemi Igban who led others to thirty four communities across the benefiting local area of Delta State to distribute educational materials to pupils and students of public primary schools in the localities, said this year’s program of the foundation centered on promoting education in the coastal communities.

The one week program tagged “Help One Million Children In Riverine Communities Get Back To School”, according to Dr Igban, was in pursuance of the aims and objectives of foundation which priority is on youth and community development with special attention to riverine communities.

He explained that the board of trustees of the foundation chose education for the fifth edition of the reach out programs because of the pivotal role it plays in accelerating development of any society, stressing that quality education had remained a major challenge in the riverine communities.

Dr Igban expressed optimism that the donated educational materials which were presented to individual beneficiaries in the eleven schools, would help promote teaching and learning in the localities.

The President and Chief Executive Officer of the Eric Igban foundation, promised that the NGO will continue its drive towards the well being of the rural dwellers and the very vulnerable in the society.

He disclosed that last year’s program of the foundation focused on Health where hundreds of people in the riverine communities benefited from the free medical outreach sponsored by the foundation.

Dr Igban expressed appreciation to the Olu of Warri, Ogiame Ikenwoli, the Amakosu of Ogbe Ijoh, Couple Markson Oromoni Mobene 111, and the Pere of Gbaramatu kingdom, Oboro Gbaraun 11, Aketekpe, Agadagba, for endorsing the activities of the foundation and encouragements during the visits to their palaces in the course of the outreach program in their domains.

They were awarded scholarships from primary to university levels by the Eric Igban foundation which also made five teachers ambassadors of the foundation for their hard work and commitment to children education.