Home News Okowa Has Done So Much For Delta, His Detractors Are Not Fair... 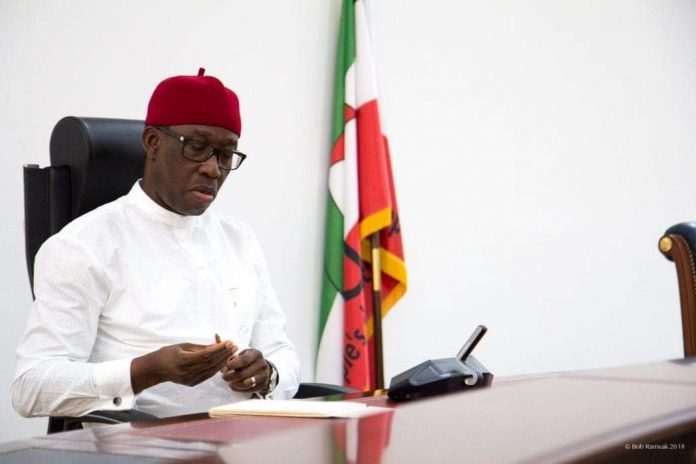 Executive Assistant to Delta State Governor on Communications, Fred Latimore Oghenesivbe, JP, has said that his boss, Senator Dr Ifeanyi Arthur Okowa has done so much for the state within a short period of five years, and still counting.

Oghenesivbe made the assertion while speaking via telephone with Crown FM Warri station, saying that those who accused Okowa are not sincere enough to admit that Delta has experienced huge infrastructure development which includes; over 280 rehabilitated and completed road projects, a gigantic multi billion naira state secretariat due for commissioning soon, ongoing building of Technical Colleges in 25 local governments, completion of Stephen Keshi International Stadium, rehabilitation and upgrade of Asaba International airport, and many more.

He noted that the governor’s political detractors and their political parties does not have anything to show in terms of track records and landmark achievements in business and service to the people, adding that all they have been doing is to unjustly criticise the governor, which he described as a sarcastic attitude born out of jealousy and politics of stomach infrastructure.

He disclosed that Asaba International Airport concession is another huge success of Okowa administration expected to rake in over N85 billion in 30years, plus improved infrastructure development, stating that the airport has become one of the busiest commercial flights hub in Nigeria, with six airlines operating into the state capital.

On the issue of Delta State repatriated £4.2 million by the UK authorities, Okowa’s EAC said similar funds were recovered by the federal government in 2007 and 2012 for Plateau and Bayelsa States, and that Delta should not be unjustly denied of the money.

He noted that what the Buhari administration is trying to do or have done is tantamount to selective justice and undue partiality wherein Plateau and Bayelsa got their repatriated funds while Delta is denied of her legitimate funds as indicated by UK and Nigeria authorities.

The EACGOV who is also a minister in the temple of justice, said the beauty of Law of equity is that what is good for the Goose is also good for the Gander, and Okowa should be trusted to apply the repatriated funds judging from his high level of financial prudence and gigantic infrastructure projects ongoing in the state.

And on the issue of the 10% recommended for host communities as trust fund in the Petroleum Industry Bill, PIB, the renowned communication strategist said the South-South governors are the core leaders and representatives of the people of the region and the host Communities, and as such their demand is legitimate with consent of the oil producing host communities.

Oghenesivbe, a Justice of the Peace, JP, further averred that for peace to reign in the oil and gas sector, and due to the strategic partnership between the oil companies and host communities, there is the need for a reasonable percentage to be allocated to host communities; so as to enable them adequately assist the federal government and oil companies in security surveillance and protection of oil facilities and/or infrastructure in the geopolitical zone.

“The Governors of the region have spoken and it is only fair and patriotic for members of the National Assembly to do away with the planned 2.5% host communities trust fund in the PIB and accept the 10% recommended by the governors of the South-South geopolitical zone before the bill is passed.

“Passing the bill as it is without adjusting from 2.5% to 10% amounts to lip service as far as government intentions to secure oil facilities in the region is concerned,” he added.