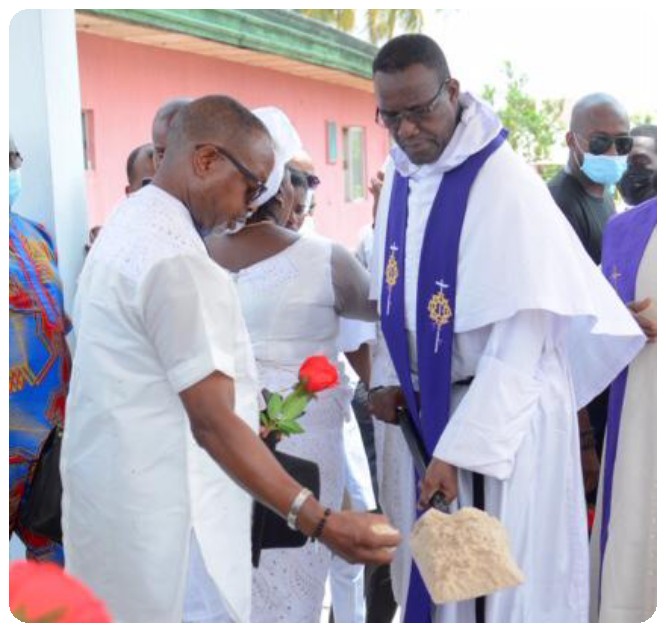 The remains of late Mr Ighoruemu Akpedeye, has been laid to rest at the Akpedeye’s family compound, Uwheru, Ughelli North local government area of Delta State.

Late Ighoruemu Akpedeye who was the immediate elder brother to late former Attorney General and Commissioner for Justice, Dafe Akpedeye, SAN, died at the age of sixty one and was buried amidst tears and eulogies by surviving siblings, children and associates.

The journey to eternal rest of late Ighoruemu Akpedeye started on Tuesday March 9 2021, with the Service of Songs at Our Lady Star of the Sea Catholic Church, Lekki, Lagos and a Requiem Mass at the Mother of Redeemer Catholic Church, Effurun, Delta State.

The events were solemn, even beyond expectations as it was very difficult for family members and friends to say goodbye to a man they described as a perfect gentleman who lived his life for others.

The Friday funeral mass which also took place at the Mother of Redeemer Catholic Church, Effurun, was attended by crèmè delà crèmè of the society, including some serving and past government officials, captains of industries, community leaders, old students bodies, friends and associates of late Ighoruemu Akpedeye.

The first reading at the service was read by the deceased’s younger brother, Aduvie Akpedeye, while the second reading was taken by the younger sister, Dr Rukevwe Ugwumba, a former Special Adviser on Health Matters to the Governor of Delta State.

In a homily, Rev Fr. Anthony Ewherido, flanked by many other clergy of the Catholic faith, reminded the congregation that death is inevitable, saying that all creatures are in God’s hands and He alone decides when to call any of them to His kingdom.

Rev Fr Ewherido recalled that few months ago, the family of Akpedeye were in the same church for the burial of one of their own, stressing that no matter how painful the experience is, they should strengthen their faith in God as no one can separate the righteous from the love of God.

The Catholic Priest stated that the late Igho was dedicated to the work of God and prayed that his good works will speak for him even in death and that God should forgive his shortcomings and grant his soul eternal rest.

He charged the living to keep faith with God and shun lives of wickedness.

At the grave side at the Uwheru home of the Akpedeyes, a team of Catholic Priests supervised the dust to dust exercise for the dead, where they again reminded the bereaved family and friends that Igho had lived his life and that it had pleased God to call him back at this time.

The Reverend Fathers, emphasized that every being who believes in God and kept his commandments can never die, but will only be called home by the Creator.

One of the children of the late Ighoruemu, Arnold and three other siblings, including Aduvie Akpedeye, Mrs Asanimo Omezi and Dr Rukevwe Ugwumba, said their late father and brother dedicated himself to the life of service.

They said as the eldest in the family, Igho was there for everybody, stressing that his demise was a big blow as he will be greatly missed by all and prayed God to grant him rest.

Some of his associates, including a one time Commissioner for Health, Delta State, Dr Chris Oghenechovwe, Mr Ama Agbajor and Tosan Tonwe, described late Ighoruemu as a man of high integrity.

They consoled the entire family, including his aged mother, Chief Mrs Theresa Akpedeye over the lose and prayed for the repose of his soul.

A reception was later held for guests at the prestigious Brown Hills Event center, Ogunu, Warri, where family members, friends and associates also took time to relive the life and times of the late father of seven.

They all said he was a man of great personality.

Guests were entertained with various musical performances and rib cracking jokes by comedians.