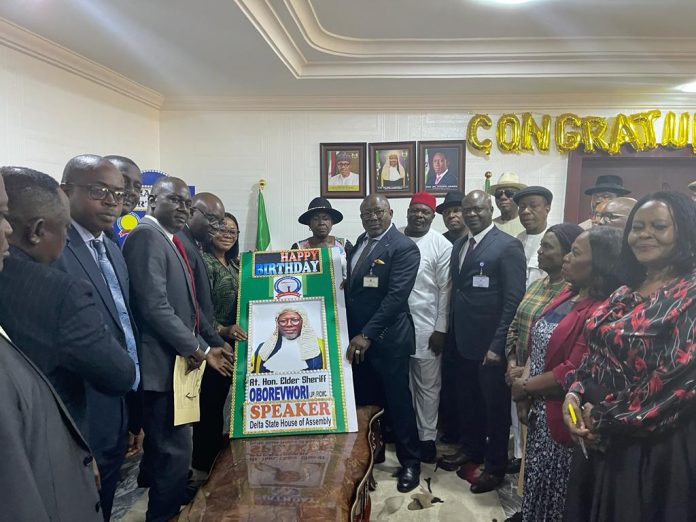 Ahead of the 2023 general election, the Speaker of the Delta State House of Assembly, Sheriff Oborevwori has enjoined Deltans of voting age to go get their Permanent Voters Card, PVC.

Addressing management of the Assembly in his office In Asaba, Oborevwori who is the gubernatorial candidate of the People’s Democratic Party, PDP for the election, said INEC PVC is key in the Nigeria’s electoral process.

The Speaker, explained that it was by possession of the PVC, the holders can effectively and efficiently participate in the elections and urged Assembly Staffs to endeavor to get it as well as mobilize others to do so.

Oborevwori who solicited for massive vote for him and all the PDP candidates in the forthcoming elections, assured of sustained progress and development in the state with him as the Governor of Delta State come May 2023.

The Speaker commended the cordial working relationship that exists among the various segments of workers in the House and thanked all for support for his leadership.

He stressed that Delta State House of Assembly is one of the most peaceful States Assembly in the Country and admonished the staff to continue to make the place peaceful and unique.

Oborevwori assured workers that their welfare would remain a top priority under his leadership of the Assembly.

The Clerk of the House, Mrs Lyna Ocholor said they were in the Speaker’s to congratulate him for his emergence as the governorship candidate of the PDP and for his birthday which came up last Sunday, June 19.

Mrs Ocholor prayed for God’s continuous grace in the life of the Speaker and wished him victory at the poll.