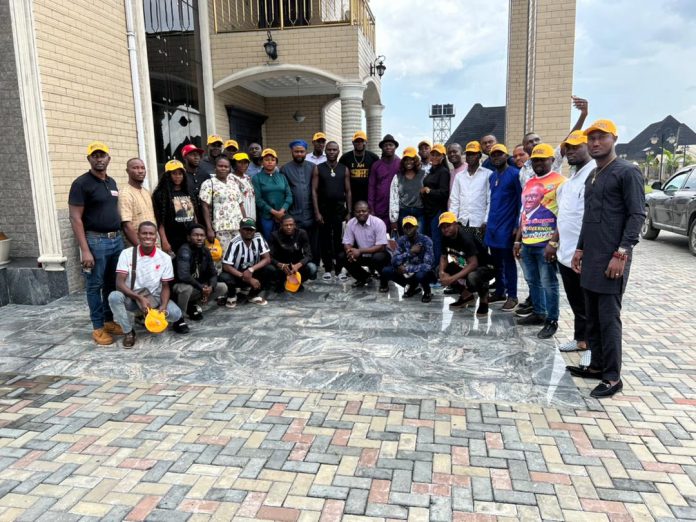 Former Chairman of Warri South West Local Government Area Honorable George Ekpemupolo has called on youths in Delta State to come together and work collectively for the victory of the Peoples Democratic Party candidates in all the elections come next year.

Ekpemupolo made the call at Ekerenkoko town today (2/7/2022) when he received on courtesy visit leadership of the youth political pressure group “More For Delta Youths Project” led by its Director General Comrade Fred Sheriff Oborevwori Junior.

The two times council Chairman who gave appraisal of PDP in the state, said the peace and security including infrastructural development being enjoy across the state, explained the valid points why PDP still a party for all.

While x-raying the Governor Okowa’s led administration and it’s benefits to Deltans especially residents of the riverine communities, said it’s only the PDP government projects that are visible to all to see, feel and behold.

No ward in all parts of the state that doesn’t have the PDP led government footprints either in the area of appointments or infrastructural development Ekpemupolo revealed.

“Before now, you can hardly see any community in the riverine areas that have any motorable road. But today, there are tared roads within these communities. The network of roads done by Governor Ifeanyi Okowa, now the vice president in waiting, are massive. We have never had it good in the riverine communities until Governor Okowa’s rural developmental agenda and drive.

No reasonable Deltan will work against PDP in the 2023 general elections because, Deltans need continuation of the peace and progress across the state.

Rt. Hon. Chief Sheriff Oborevwori, speaker of the most vibrant House of the State Assembly, by God’s Grace, our next Governor, Doctor Ifeanyi Okowa, next vice president and other offices, are all our projects to deliver.

And I want to commend More for Delta Youths for coming together for projecting and promoting the MORE Agenda of our incoming Governor and other PDP candidates, Ekpemupolo stated.

Ekpemupolo who had earlier endorsed the group said that 99.9% of the Peoples Democratic Party leaders will also welcome and embrace the organization because of it’s aims, ideologies and well structured agenda.

He however appealed to the youth group to take the message of PVC registration and collection to every part of the state very seriously so as to guarantee PDP candidates landslide victory in all the elections.

“You must be united and work with your ideas and must not put frivolous things in front but work in patience and diligence to achieve your goals.

Concentrate on the job ahead, assimilate and learn from the moral lessons, use the opportunity to get contacts of those you meet through this movement and, build yourselves positively”, he added.

Ekpemupolo who prayed that Rt. Hon. Sheriff Oborevwori become the governor of Delta state come 2023 also urged him to deliver good governance to the people of Delta state so that youths can see him as a role model even as he promised to support the movement to achieve it’s goals.

Ugagaoghene also exposed Ekpemupolo to some of the group achievements in recent times and requested partnership for more engagements as one of the group patrons.

Highlight of the visit was vote of thanks by Warri South West council Leader of the Legislative arm and team member of the MFDYP in the council Honorable Emiko Etuwewe.

Those present include Mr Frank Kemiye, PDP assistant secretary in the council Hon Andrew Oguma among others.
#Austin Azu