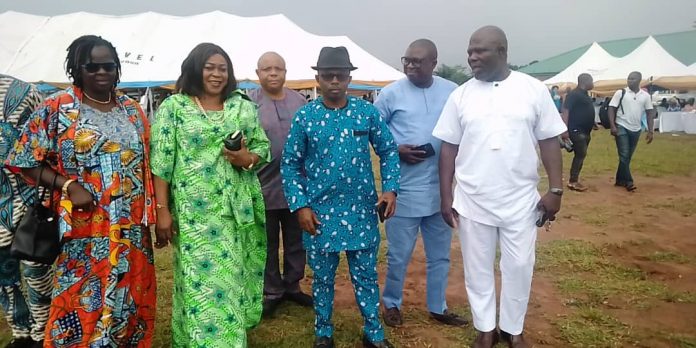 Ezewu stated this at Obiaruku, the Headquarters of Ukwuani Local Government Area of the State during the burial ceremony of the mother of the Director of Schools, late Mrs. Veronica Oyibonanu Animam .

The Secondary Education commissioner, who was fielding questions from newsmen shortly after the burial ceremony which was attended by former House of Assembly member for Ukwuani Constituency, Hon. Alphonsus Chukwutem Ojo , the Permanent Secretary in the State Ministry of Basic and Secondary Education, Mr. Augustine Oghoro and several stakeholders in the education sector, said that Mrs. Ojumah had been very outstanding in delivering her official duties.

She admonished Mrs. Ojumah and her siblings to take solace in the fact that their mother lived life worthy of emulation, recalling that it was normal for a child to bury the parents rather than the parents burying their children.

Also speaking, the Permanent Secretary in the State Ministry of Basic and Secondary Education, Mr. Augustine Oghoro, who said that death was inevitable to humanity, described Mrs. Clementina Ojumah as a dependable and reliable civil servant.

Mr. Oghoro disclosed that Mrs. Ojumah was hard-working and uncommon educationist, adding that she had continued to discharge her duties with utmost commitments.

He urged the family of the deceased, especially the Director of Schools in his Ministry and her siblings to always sustain the legacies of their mother , stressing that from every indication, late Mrs. Veronica Animam was an accomplished educationist and disciplinarian.

In his remarks, the Chairman of the Forum of Chief Inspectors of Education (CIEs) in the the 25 Local Government Areas , Prince Alikwe Theophilus said that the Director was accommodating and accessible at all times, adding that she had impacted positively on each and everyone of them in one way or the other.

Prince Allkwe Theophilus said that the deceased has touched several lives positively, urging the children to always love one another and put their trust in God at all times.

Earlier in an interview with journalists, a son in-law and the husband of one of the children of the deceased, Dr. Augustine Ojumah said that his mother in-law was a kind-hearted woman, disciplinarian and a seasoned educationist who ensured that all her children were educated.

Ojumah, a Medical Doctor in Obiaruku General Hospital described his wife as the pillar and confidant, adding that she had been very supportive to him and the family at large even as he emphasised the need for the deceased children to strengthen the peace , love and unity existing in their family which according to him their late mother exemplified.