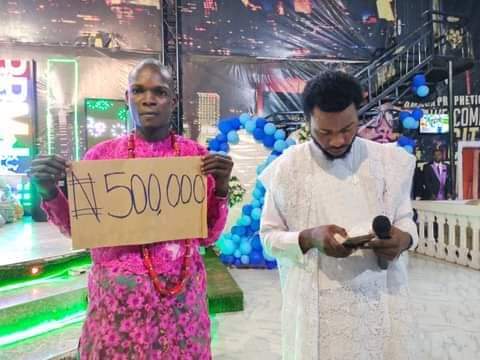 As part of the activities to mark its 7th year anniversary, The Omega Prophectic Prayer Ministry, OPPM, in Sapele, Delta State has empowered over 100 persons with skill acquisition tools, and cash to support it’s church members.

Apostle Daniel Ogharanduku Ololo the General Overseer, while addressing members of the church and visitors who came to witness the 7th year anniversary of the OPPM which was held on Sunday 7th Of August, 2022 at the church auditorium said that the church started in 2015 at the present site with few members and at today the church has grown to be the biggest church in the area.

The Prophet, popularly called as Major 1 while addressing the congregation said that the Lord has blessed the church beyond measures, adding that they have moved from greatness to greatness.

“Seven years we have all grown from glory to glory and God has been blessing us. Last we had reach out to members of the church in all because the Lord has been merciful and generous and we will continue to reach out” he said.

He however said the church was prepared to support members in all aspects, insisting next year will be better.

Over 100 women and men benefited from the Empowerment, with the female gender benefitting the most. “When I went to purchase these items, they were saying why mostly women, I told them the men own has passed and these is the season for the women but I won’t leave the men that is why we have bought something for them” he said.

He then presented the items, 20 hairdryer, 10 grinding machines,10 sewing machines with several hair clippers and pressing irons for the men.

Presenting the gifts to the beneficiaries, Prophet Ololo urge others to be committed insisting that those who did not benefit today will certainly do so next year.

Some of those who did not get the items were rewarded with equivalent cash.

Miss Janet Umukoro a church member who was presented with N45,000 cash to buy a new sewing machine since the ones on ground did not reach her, congratulated the Prophet noting that this will change her life.

Another beneficiary, Mrs Esther Bobi who got a sewing machine said he will continue to thank the General Overseer and she will certainly make use of the equipment, “noting that she will empower others as time went by, I will start today and get a shop and make use of it, I am really grateful to Major for all he has done in this church” adding that his generousity is unquantifiable, while praying to God Almighty to bless and keep the prophet safe.

Another beneficiary by name Cynthia Agodofia who got an hair dryer said that she will be able to open her hair salon and utilize the equipment to the fullest. She appreciated the prophet and prayed for his long life.

An instrumentalist in the church who gave his name as Samuel Victor got a hair clipper, said that though he was not a barber, he was very appreciative of the gift he got from the man of God, while noting that it will be for his personal use.

Other beneficiaries who spoke to newsmen said that Prophet Daniel Ololo was one man who loves to give and assist people. They dance and sang praises to God while praying to God Almighty to continue to bless his prophet.

Some of the church members were presented with cash gift ranging from 50,000 naira to 500,000 as support.

Highlight of event was the cutting of cake by the prophet and his beautiful wife.