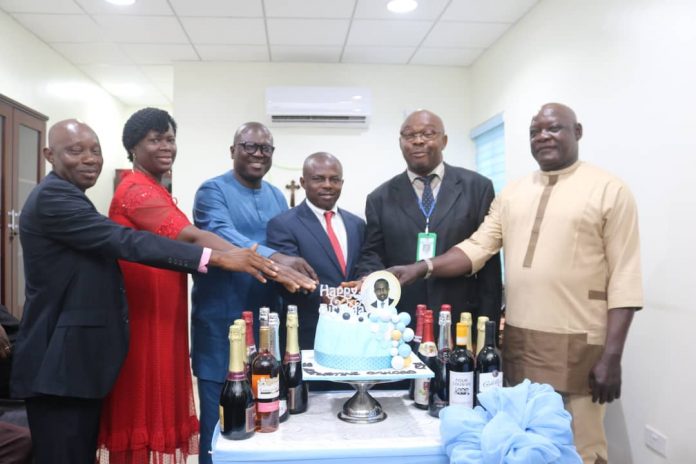 The Permanent Secretary, Delta State Ministry of Basic and Secondary Education, Mr. Augustine Oghoro has commended staff of the Ministry for their contributions in ensuring effective implementation of the educational policies of the State Government as well as their support to him at all times.

Mr. Oghoro stated this in his office in Asaba during his birthday celebration which was organised for him by the Directors and staff of the Ministry.

The Permanent Secretary said that he was overwhelmed by the show of love and care from the staff of the Ministry, adding that the surprise package from them was commendable.

While appreciating them for the birthday surprise, Mr. Oghoro stated that he would continue to operate an open door policy and carry the staff among in the scheme of things.

Earlier in their goodwill messages, the Director of Quality Assurance and Inspectorate, Comr. Enerst Ossai and the Director of Examination and Standard, Mr. Sunday Egomagwuna described Mr. Oghoro as a quintessential administrator.

The duo said that the Permanent Secretary had always shown exceptional leadership qualities to them, stressing that he was a quintessential and humble individual.

Comr. Ossai and Mr. Egomagwuna, who congratulated the Permanent Secretary on his birth anniversary, prayed God to give him good health and wisdom to continue to excel in every of his endeavours.

In his remarks, the Parish Priest of St. Anthony’s Chaplaincy, Dennis Osadebay University, Anwai-Asaba, Rev. Fr. Joseph Ebegbuna said that Mr. Oghoro had always touched lives positively just as he described him as an accomplished administrator.

The Director of Schools in the Ministry, Mrs. Clementina Ojumah described Mr. Oghoro as an exemplary leader, adding that he always accessible and ready to mentor the younger generation of civil servants .