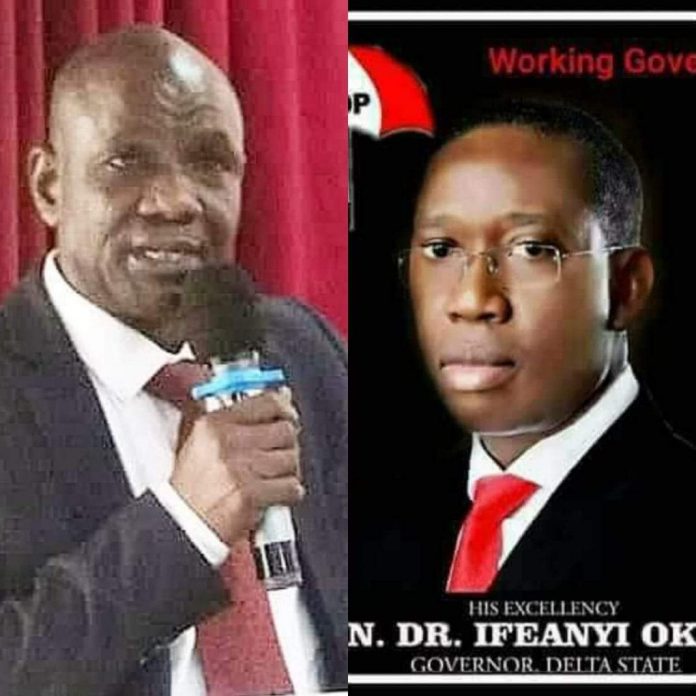 Executive Assistant to Delta State Governor on Communication’s, Chief Dr Fred Latimore Oghenesivbe Esq, has described a self acclaimed activist, Comrade Sheriff Mulade, as a mischievous talkative, and urged him to revive his dead conscience.

The Eacgov in a swift reaction to a trending story on social media, wherein Mulade ignorantly lamented the state of affairs in Delta, said the state governor and Vice Presidential candidate of the Peoples Democratic Party, PDP, His Excellency Senator Dr Ifeanyi Arthur Okowa, in the past seven years received over twenty star Awards from different local and international organisations for his giant strides in socioeconomic remodelling, infrastructure development, wealth and job creation, youth and women empowerment and so on and so forth.

He noted that one of such awards came from the oldest newspaper in Nigeria, the Nigerian Tribune which bestowed the prestigious Award of “Platinum Governor” on Senator Okowa, in recognition of his invaluable contributions to the rapid socioeconomic and infrastructure development of Delta State, and for his patriotic ingenuity in peace building, charismatic leadership and security of lives and property in the state.

He went on to say that Asaba International Airport which was downgraded by the federal aviation authorities before he assumed office in 2015, was rapidly upgraded to international standard, certificated by both federal and international aviation organisations, fully concession and currently one of the busiest commercial flight operations hubs in sub sahara Africa where big commercial aircrafts take off and land with ease.

Oghenesivbe noted that under Okowa, Delta State remained in the front role of strategic politics and economic advancement; trained and empowered over 25,000 Delta Youth directly and indirectly under Rysa, Yagep, Step, Project Gest for Girls, Delta Cares and other strategic socioeconomic remodelling packages, which modestly placed Delta State far ahead of other states in Nigeria, as rightly affirmed by the Nigerian Bureau of Statistics, the World Bank, the Central Bank of Nigeria, Tony Elumelu Foundation, United Nations agencies in Nigeria, et al.

“It is indeed very sad that a self acclaimed activist, Mr Mulade could murder truth in broad day light about the state of affairs in Delta State under Okowa. I advise him to revive his dead conscience.

“I wondered how much Mulade was paid to commit this blunder and verbal diarrhea of monumental proportion. He lives in Delta and ought to commend governor Okowa for the various developmental strides in the creeks, rural and urban cities, but looked the other way because of a morsel of bread. What manner of man is Mulade?

“Six Technical Colleges in the State were shut for nearly two decades and Okowa revived and equipped them within three years in office. Normal academic activities resumed, thereby increasing human capacity development of youth, as well as providing jobs for teaching and non teaching staff of the colleges.

“Nine additional Technical Colleges are near completion and will be commissioned very soon, while plans are in top gear to build one Technical College in each local government area across the state, a deliberate effort by Okowa administration to boost vocational education which guarantees acquisition of professional skills and self employment.

“It is only a caring and responsible government that can undertake these kind of progressive projects. Mulade is aware that Okowa is a prudent manager of state resources, a dynamic and charismatic leader who will stop at nothing to provide good governance for Deltans, as can be seen from the governor’s enviable achievements in the past seven years and counting.

“Okowa established two development agencies to facilitate infrastructure development and beautification of the state capital, Asaba, as well as Uvwie, Effurun, Warri and environ. These agencies have been doing the needful and the evidence is there for all to see. These are some of Okowa’s legacies that cannot be talked down by a thousand Mulades.

“In sports development, Delta State under Okowa has been making waves from 2015 till date. The state came first in several national sports competitions and have been receiving international media attention for the several medals won by Delta athletes representing Nigeria at the just concluded Commonwealth Games in Birmingham.

“The aged and widows in Delta will never forget Okowa administration because of their monthly stipends. They feel the good governance in Delta State under Okowa. The list is endless.

“Mulade should revive his dead conscience and acknowledge the good governance in Delta. Constructive criticism is ideal to ginger government to do more, but it is absolutely mischievous to deliberately and falsely condemn a performing governor and his Award winning administration.

“Okowa’s monumental achievements in the past seven years cannot be wished away by a thousand Mulade put together,” Oghenesivbe said.