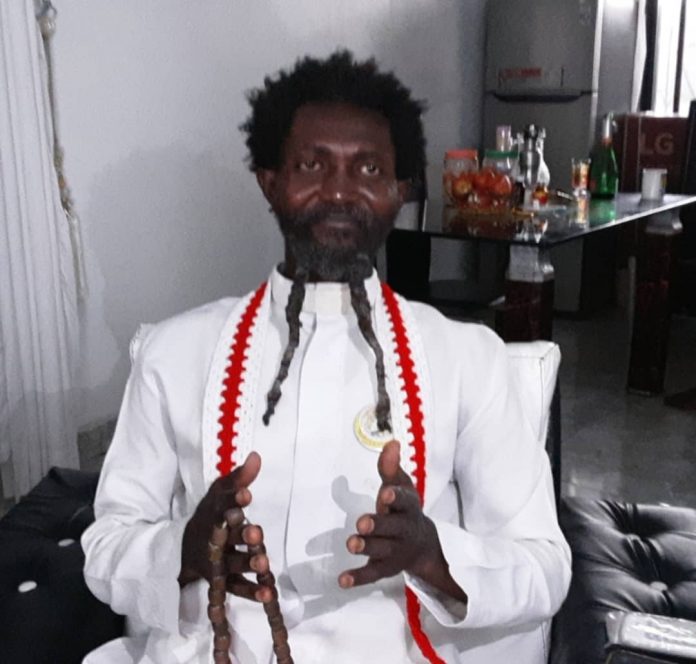 Ahead of the 2023 general elections, Prophet Coming of the Lord of Paradise The Last Day Church of God a.k.a. Deliverance Ministry for the Kingdom of God, has prophesied that the All Progressives Congress (APC) Presidential Candidate, Asiwaju Ahmed Bola Tinubu will be the next president of Nigeria.

Prophet Coming of the Lord, gave the revelation while speaking to journalists at his residence in Otokutu, near Warri, Delta State, saying that the lord revealed so many things in an encounter on his recent sojourn to a prayer mountain.

The cleric who in 2019, prophesied that President Buhari will win, as well as the Deputy Senate President, Senator Ovie Omo-Agege, said Nigeria has credible men and women who can govern the country, but was quick to add that God has decided to favour Ahmed Tinubu because of his contribution to humanity.

The long bearded Prophet said,”I will tell you what God said concerning 2023 election. Like I prophesied before the APC primary that the man called Jagaban will win and I asked God who is Jagaban why are you talking about Jagaban?”

“The Lord said that he does not look at appearance but that He looks at acts. That this man ruled Lagos and made Lagos become a better place. That the grace He sees in APC, APC will win the presidency of Nigeria. And not only that, that all that he has suffered to make people leaders, He promised to make him president.”

According to the Prophet,”Now by the grace of God, the Lord said the election will be tough but that out of the whole thing, we will see result. We will see a leader and others will be opposition. The Lord said the youths should be careful about who they want to fight for because is He that gives power.”

“God now spoke about Jagaban and I asked who is he? The Lord said he is just a simple man. He is not looking for money because he already has money. God said he want to make a name, fame. That he will rule more than President Buhari. That people should not mind what Buhari did that he offends God that the power He (God) collected from Jonathan in 2015, no party can collect it back.”

“The Lord said he does not have the capability to picking up the Presidency. Even PDP, there is nothing wrong with the party but the Lord said, Jagaban has worked for the position. And God has said he must be, against all odds.”

“Concerning the aspect of tribe, whether Muslim or no Muslim, the Lord said I should tell them whether Christian rule, we are having Osinbajo and we could not hear his voice.”

Speaking futher, the Cleric who said that he has no interest in any of the political parties but only delivering the message sent him by God, as he does not prophesy for money neither does he prophesy to please men, said he also see a dramatic turn in Delta State in favour of the All Progressives Congress (APC) , Senator Ovie Omo-Agege.

He therefore, called on members of the Peoples’ Democratic Party (PDP) in Delta State to call for prayers to avert a crisis that may tear the party beyond reconciliation, adding that the incumbent Speaker of the Delta State, Rt. Hon. Sheriff Oborevwori, must take a step further to fast and pray against challenges bigger than the one currently working against him candidature.