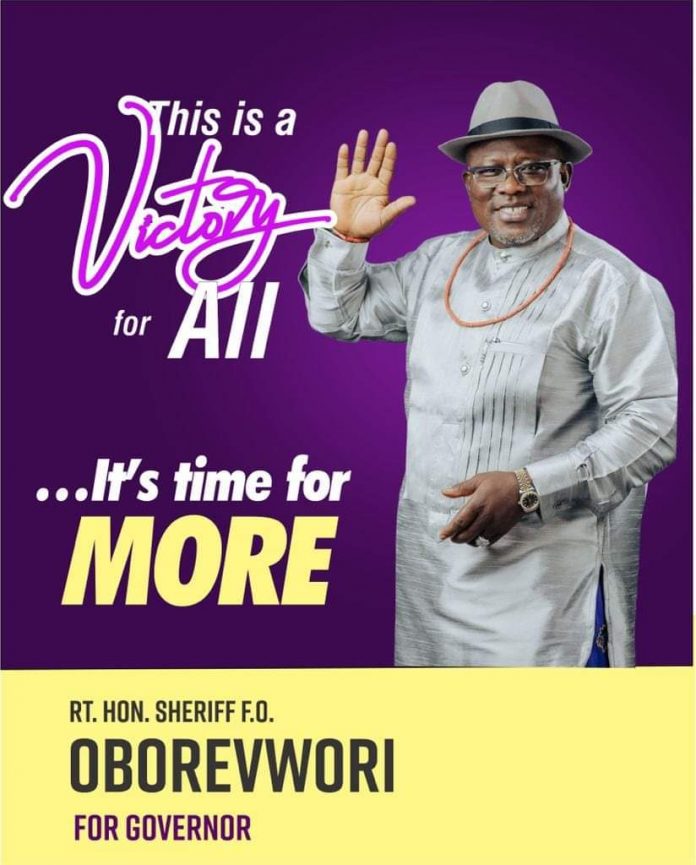 Coalition for Media Politics and Governance, CMPG, has described the superlative victory of the governorship candidate of the Peoples Democratic Party, PDP, in Delta State, Rt Hon Sheriff Francis Oborevwori, at the Appellate Court, as a victory not only for the candidate but for all Deltans.

The group noted that the Appellate Court’s sound judgment has confirmed that the judiciary is indeed the hope of the oppressed and the common man, adding that candidate Oborevwori Sheriff Francis Orohwedor, is a divine project, a popular politician with excessive local content and generally accepted candidate of the party in Delta State.

“CMPG congratulates our principal and governorship candidate of Delta PDP, as well as the good peiple of Delta State, over the Appellate Court judgment.

“We are convinced beyond reasonable doubt based on his past antecedent as the longest serving speaker in Delta State, that our governor in-waiting, Oborevwori will govern the state without blemish.

“Oborevwori shall build on the monumental achievements of the incumbent governor and PDP Vice Presidential candidate, Senator Dr. Ifeanyi Arthur Okowa, in whom we are well pleased in terms of overall development of the state in the past seven years and counting.

“It’s time to collapse structures and give all necessary support to our candidate and party.

“Our ultimate goal as a people and party, PDP, is to completely wipe out the dilapidated political structures of the All Progressives Congress, APC, from the political landscape of Delta State and by extension Nigeria via landslide victory in 2023.

“CMPG recognises the power of unity in diversity, and therefore call on Olorogun David Edevbie and his supporters to join forces with our candidate in full scale preparations for 2023 gubernatorial elections,” CMPG added.