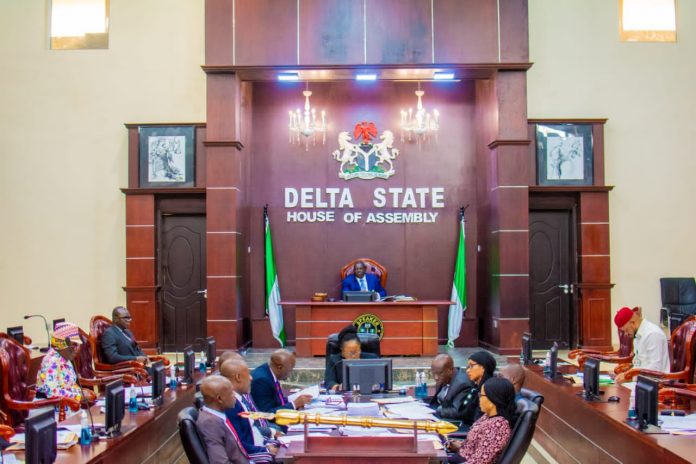 A bill for a law to establish the Delta State Good Governance and Accountability Commission and for connected purposes has passed second reading on the floor of the State House of Assembly.

The development followed extensive debates on the merits of the 38 paged bill during Tuesday’s plenary of the House, presided over by the Deputy Speaker, Rt Hon Ochor Christopher Ochor.

The bill which has the Chairman, Assembly Committee on Public Accounts and Member Representing Ika North East, Hon Anthony Emeke Elekeokwuri as lead sponsor, seeks to domesticate activities of the various anti corruption agencies in the country, including EFCC and ICPC.

Leading debates on the merits of the Bill, Hon Elekeokwuri, eloquently ran through almost all the clauses in the financial crime bill, saying that the proposed law is to deepen the process of accountability in governance as well as fight waste in the system.

The Lawmaker who stated that Deltans have been yearning for the bill to check corruption for greater development in the state, explained that the Constitution of the Federal Republic of Nigeria gave the State Legislature powers to make laws for peace and good governance of the state.

Elekeokwuri said the Good Governance and Accountability Commission, when established will entrench transparency, fight corruption, promote accountability,
checkmate misappropriation of public funds, as well as place sanctions on erring officers of government or agencies in the state.

The PAC Chairman emphasized that blocking leakages in the finances of the state would result to more money to carry out developmental programs and projects by the state government, stressing that the proposed Law empowers the Commission to investigate activities of statutory institutions of government as well as receive complaints from Deltans.

According to Elekeokwuri, the bill when passed and signed into law will go a long way in helping to mitigate the prevalence of corruption in the State’s public and civil service, saying “we are not fighting anybody, rather, like the Bible says, “Righteousness exalts a nation, hence our efforts as lawmakers. If we don’t kill corruption, corruption will kill us”.

Referring to the various financial and audit laws as well as the Administration of Criminal Justice law earlier passed by the State Assembly, Elekeokwuri maintained that the bill is to cap up all the integrity laws in the state to enhance transparency, accountability and good governance.

“Distinguished colleagues, I must emphasized that this bill will entrench accountability, transparency and good governance in the State. It will check corrupt practices in the State Public and Civil service, particularly misappropriation of Funds by the various Ministries, Departments and Agencies, MDAs, even the Delta State House of Assembly, Elekeokwuri stated.

He said only those with impeccable characters will be appointed into the Commission when established, even as he expressed optimism that the proposed law would check fraudulent practices in the state.

In their contributions, Hon Solomon Ighrakpata, Uvwie, Oboro Preyor, Bomadi, and Ferguson Onwo, IsokoSouth 2, said the proposed law will strengthen the principles of transparency, accountability and integrity in governance.

The Lawmakers who lauded the massive capital projects in the state initiated by Governor Ifeanyi Okowa’s administration, noted that the proposed law would further build up the confidence of Deltans on the state government.

They said abandonment of projects has remained a big challenge at both local, state and federal levels, stressing that the bill is all encompassing and there are so much to gain from it.

Ighrapata, Preyor and Onwo commended Hon Anthony Elekeokwuri for initiating the bill and for his quality presentation, saying that the proposed law captures the very essence of democracy which is good governance.

Others who spoke, including Pat Ajudua, Oshimili North, Austin Uroye, Warri South 1 and Emeke Nwaobi, Aniocha North, described the bill as apt and timely, and called for its speedy passage.

They stated that the proposed law is all about protecting the common wealth of the people, stressing that the entire state is being brought under focus.

The Deputy Speaker, Rt Hon Ochor Christopher Ochor who commended members for the sound debates on the basics of the bill, subsequently referred it to House committees on rules, business, legal and judiciary matters and special bills.

They are to report back to the House on Tuesday, 20th September 2023.