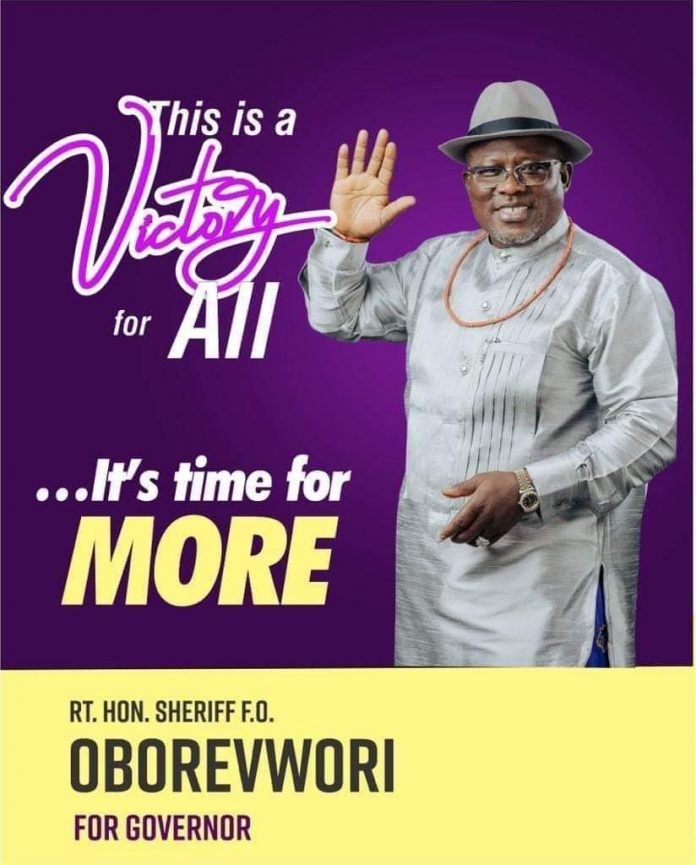 The District Court of the Federal Capital Territory sitting in Abuja, has rebuked a member of the Peoples Democratic Party, PDP, and busy body complainant, Hon Evance Ivwurie over forum shopping and lack of locus standi in a Court that lacks criminal jurisdiction.

It will be recalled that the complainant, Evance Ivwurie, who failed woefully in his reelection bid into Delta State House of Assembly as member representing Ethiope East State Constituency in 2019, and which is connected to his unjustified aggression, had filed a complaint at the District Court of the FCT, seeking the prosecution of the Defendant and governorship candidate of PDP in Delta State, Rt Hon Sheriff Francis Orohwedor.

The estranged complainant had in his infamous and highly discredited, illogical and legally defective complaints alleged criminal offences of impersonation and identity theft against Oborevwori, under the penal code and the cybercrime Act.

He fraudulently and falsely alleged that Oborevwori, a law abiding citizen, a Justice of the Peace and incumbent indefatigable longest serving Speaker of the Delta State House of Assembly, had impersonated the identity of an unknown person to obtain the WAEC certificate issued by Oghareki Grammar School in Delta State.

Ivwurie further lied that Oborevwori subsequently used the said WAEC certificate in question to contest elections into the Delta State House of Assembly in 2015; a claim that was swiftly debunked by the School Principal and the issuing authority, the West African Examination Council in separate official pronouncements and authentication of the certified true copy of the WAEC certificate.

In the light of the above empty, laughable and frivolous allegations, Oborevwori’s legal team raised valid objections stating; that the District Court of the FCT lacks criminal jurisdiction to hear the matter, the complaint by Evance Ivwurie is defective for being in colossal breach of Section 89(4) of the Administration of Criminal Justice Act, 2015; the complainant’s Affidavit disclosed a pre-election dispute which is obviously outside the jurisdiction of the District Court of the FCT, et al.

The Court in it’s ruling on Thursday 8th September, 2022; resolved all six grounds of objections in favour of the Defendant, Rt Hon Sheriff Francis Orohwedor, and tongue lashed the complainant, Evance Ivwurie, for engaging in forum shopping which had been frowned upon and heavily discouraged by the Supreme Court of Nigeria, in multifaceted judgements.

In swift reaction to the judgment of the District Court of the FCT, the Leader of Sheriffied Delta Media Group, Dr Barr Fred Latimore Oghenesivbe said God be praised for the multifaceted victories recorded by Oborevwori, describing him as a divine project, a perfect gentleman and a consummate leader.

“This is another superlative victory for the Peoples Democratic Party, good people of Delta State, the Sheriffied Family worldwide and Oborevwori’s political associates and for his teeming supporters.

“Our Principal, Oborevwori, is humble in victory and has expressed absolute confidence in God and the judiciary as we make preparations to win the 2023 governorship election convincingly.

“I respectfully urge all Oborevwori’s detractors to sheath their swords, accept the sound judgments of the Court of Appeal and come on board the Sheriffied winning team for 2023 governorship election,” Oghenesivbe added.