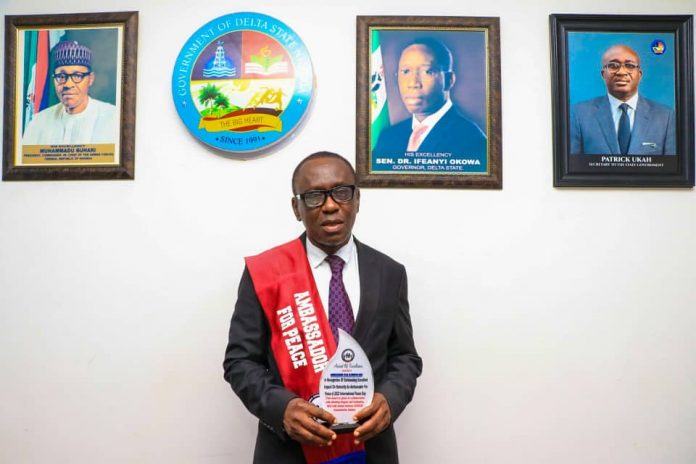 The Senior Special Assistant to Governor Ifeanyi Okowa of Delta State, Office of the Secretary to the State Government (SSG), Sir Felix Ideh has been honoured with a United Nations Ambassador for Peace award.

The award was part of the 2022 Global Peace Week

In his remarks shortly after receiving the award, Sir Ideh described the award as a thing of joy to him , adding that the recognition came to him by surprise as he never expected it .

Sir Ideh , who commended United Nations for finding him worthy of the recognition, stated that the award would spur him to contribute more to the society especially in the area of promoting peace and unity among the people.

While saying that he was always ready to add values to the society through effective service delivery in order to realise result , Sir Felix Ideh noted that it was gratifying to show commitments to anything one assigned to do.

Sir Ideh, who however, lauded the Governor, Senator (Dr.) Ifeanyi Okowa and the Secretary to the State Government (SSG), Chief Patrick Ukah for giving him the platform to serve in the administration, pledged to contribute meaningfully in any capacity he was called upon to serve.