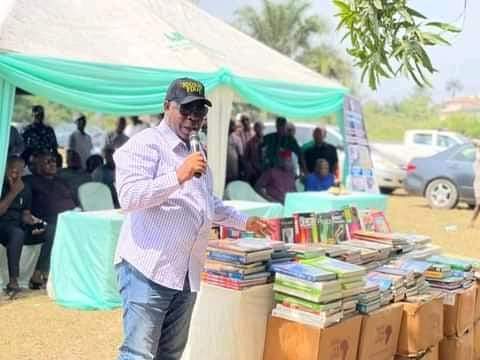 The Deputy Governorship candidate of the People’s Democratic Party (PDP) in Delta State, Chief Monday Onyeme has said no fewer than 800 Ndokwa students across various higher institutions in the country have so far benefited from his scholarship programme through ‘Monday Onyeme Foundation’.

Addressing support groups and stakeholders in ward 3 headquarters, Ndemili in Ndokwa West LGA, Onyeme
promised that more Ndokwa sons and daughters will benefit from his gesture.

He appreciated the support of the people for him and the People’s Democratic Party, assuring them of more dividends of democracy.

Onyeme charged them to redouble their efforts in the campaign for all the PDP candidates ahead of the 2023 general elections.

“Beyond the numbers of students in my scholarship programme. I have facilitated employments of over 150 Ndokwa sons and daughters in the Federal College of Education, Asaba, National Open University of Nigeria, NOUN, various ministries in the state and the security outfits. When we vote for all PDP candidates what it means is that there will be greater opportunities for all of you.”

While urging them not to be deceived by the presidential candidates of the Labour Party and the APC Mr. Peter Obi and Bola Ahmed Tinubu respectively, Onyeme noted that the Atiku / Okowa presidential ticket remain the best for the country as according to him, Okowa as the Vice President come 2023, more opportunities will be open for Deltans.

The Deputy Governorship candidate, urged the stakeholders to ensure total victory for all PDP candidates saying Sheriff Oborevwori administration come 2023 will build on legacies of governor Ifeanyi Okowa in the state.