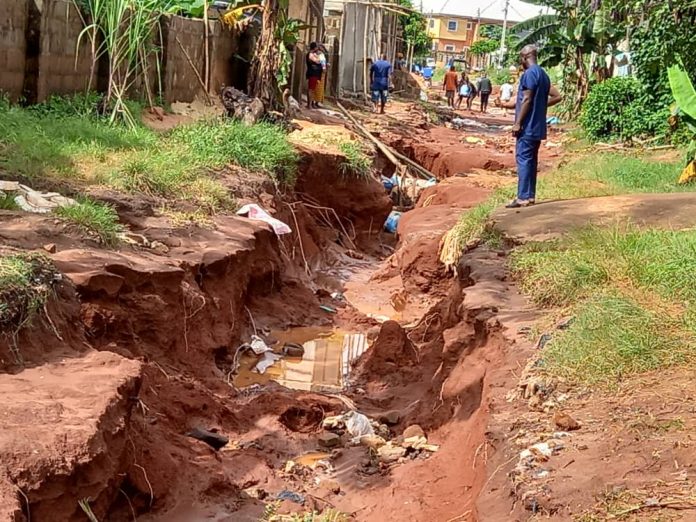 It is unfortunate that someone would sponsor persons carrying placards to tarnish another’s image and then called it a protest. What was seen in that sponsored protest was a charade, intentionally planned to make a report to malign and discredit the person of the Senior Special Assistant to the Governor of Delta State, Hon. Anthony Anukwu.

This Rejoinder is to correct the misinformation churned out by no other person than the sponsor of the said biased protest and main culprit himself, Mr. Joseph Obi.

According to Hon. Anukwu, “This issue started in 2017 when petitions started flying up and down that my property which I acquired from the Ezechie’s family of Okpanam was on a road and claiming that it was also built on water channel. There was a building already in the land when I acquired it and in fact I have not even done anything therein.

“As claimed by the said Joseph Obi that they had written severally to the Government of Delta State through the Ministry of Lands, I have as well been going to defend the land, in fact with the family that sold it to me. The Ministry of Land has said times without number that I never built on the road nor blocked the waterways.

“Having brought the Land’s map to ascertain the cause of the erosion in the area, it was actually confirmed that the said Joseph Obi who bought a land meant to be a road, built on it and closed the road, which today serves as Joseph Obi Street, Airport View Estate.

“The said Joseph Obi is not an indigene of this area neither was he involved in the plotting of the land in the area. He is a co-tenant like me. So how is he now the one determining where a road or waterways should be?”, Hon. Anukwu questioned.

From all indications and verifiable authorities, Joseph Obi bought the land meant for road which he built on and eventually closed the road. Following an on the spot assessment of the erosion ravaged road, it was clear that water must definitely find its way.

Now water usually comes from the other street to join the T-Junction road which is now the Joseph Obi Street and meant to flow down through where the house of the said Joseph Obi is. Unfortunately, he had built on the road and blocked it with his house, denying water its natural access.

As a result of the effect of the erosion which couldn’t abate, Joseph Obi then allegedly turned back to start accusing Hon. Anukwu of blocking the waterways using the media, when in actual sense his property had nothing to do with the water channel.

It is evident that water will always find its route, which from the physical assessment of the area indicated no sign at all that the flood water in the area was meant to pass through Hon. Anukwu’s land or property.

As earlier confirmed, “the new owners of the area – the Umuodafe village of Ibusa, led by Chief Fred Ajudua had been here to verify the cause of the erosion and they gave their verdict that Joseph Obi’s house should be demolished for being on the road and blocking the waterways. What more do we need to ascertain that he is the actual culprit causing untold hardship on residents, as occasioned by his blockage of the waterways in the area?”, Anukwu had asked.

In addition, Anukwu continued, “I find Joseph Obi’s outbursts against me as a case of a thief being pursued and while running, he kept on shouting thief, thief. Those who came out to assist with the arrest of the thief could not know who exactly was the actual thief.

“On this note, for maligning, discrediting and denigrating my hard earned name and image, I have briefed my lawyers to activate a legal action against Joseph Obi, except he retracts his unfounded and fabricated story against me and apologises in seven (7) days.

“I, Hon. Anthony Anukwu unequivocally demand that Joseph Obi must apologise for misinforming the public about my person or face the full weight of the law”, he posited.