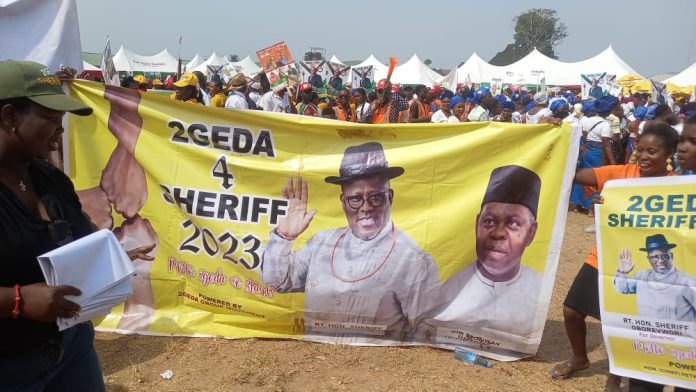 The group at the flag off of the local government areas campaign across the state by the Delta State PDP Campaign Council for the 2023 general elections, said it is committed to overwhelming victory of their Principal Sheriff Oborevwori and his running mate, Sir Monday Onyeme in the electoral contest. 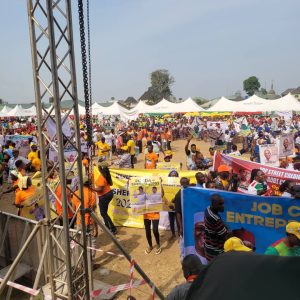 The Director General, “2geda 4 Sheriff 2023” Engr Chiedu Kebodi and Secretary, Mr Truth Ilaya, in a statement after mobilizing members for the campaign flagged off at Patani and Isoko North local government areas, explained that the group had embarked on aggressive door-to-door campaign it adopted from the very beginning INEC lifted the ban on electioneering campaigns by political parties for next year general elections.

Engr Kebodi and Mr Ilaya in the statement, said the main objective of “2geda 4 Sheriff” is to ensure total victory for the PDP candidate, Rt Hon Oborevwori and all other candidates of the PDP in the general elections, stressing that it hope to achieve the landslide victory through effective and efficient grassroots mobilization. 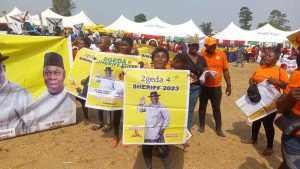 They said the M.O.R.E. agenda of their Principal encapsulates the development vision of every reasonable Deltans, emphasizing that victory for Oborevwori will further consolidate on the laudable achievements of the Okowa’s led administration.

Engr Kebodi and Mr Ilaya pointed out that Sheriff Oborevwori as a two term Speaker of the Delta State House of Assembly, has been a major key player in peace, unity, good governance and development of the state, maintaining that the state would benefit so much from the wealth of experience gathered over the years by the Speaker when elected Governor of Delta State come May 2023. 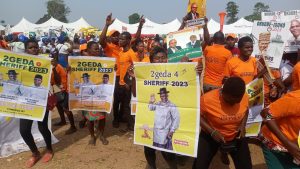 “Our focus as members of 2geda 4 Sheriff is to ensure our Principal win the governorship election. We will sustain our campaign using door to door to project the image and goals of our Principal. He is a man with great vision. Sheriff as Governor of Delta State will promote peace, unity, good governance and development of the state. He is a man of the people. He understands the needs and aspirations of Deltans. We need the votes from every part of the state, hence the mobilization”, they said in the statement.

Engr Kebodi and Mr Ilaya commended the commitment of members to mobilizing support for the PDP candidates and urged all not to relent in that regards even after victory. 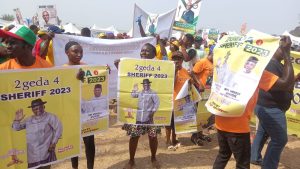 On her part the Publicity Secretary of the pressure group Mrs Anthonia Ojukoko, said “2geda 4 Sheriff 2023” disciplines are also encouraging eligible voters who had register to go for their Permanent Voters Card, PVC.

Mrs Ojukoko explained that the electorate must collect their PVC to enable them exercise their franchise by voting enmass for Oborevwori and all other PDP candidates in the election. 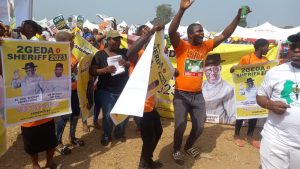 “There is a sure victory for our Principal and every candidate of PDP. Delta State will experience massive growth with Sheriff as Governor, hence we are supporting him to actualize the goal. All over the state, it is Sheriff, Sheriff, Sheriff. We thank God for the successes so far recorded and we pray that it shall all end in praise” the Publicity Secretary noted. 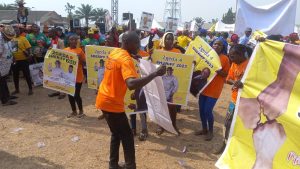 The group assured that the mobilization continues as the PDP campaign train tour all nook and grannies of the state.