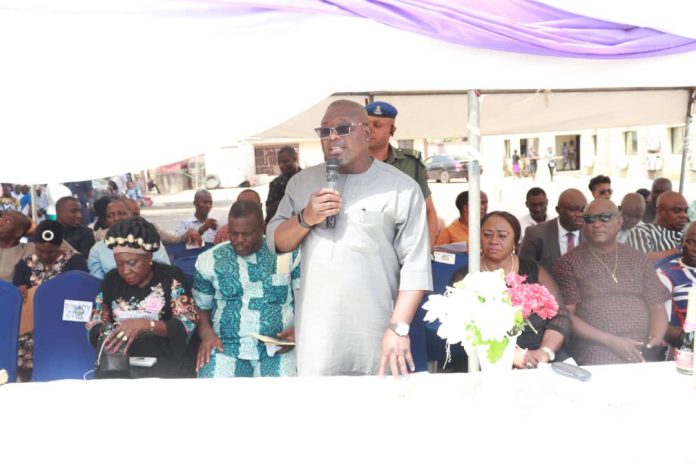 The Speaker of the Delta State House of Assembly, Rt Hon Sheriff Oborevwori has said that the House places high premium on its  workforce.

Speaking at a  send off party  ceremony of retired staff of the Assembly on Monday, March 9, 2020, the Speaker disclosed that in order to sustain a knowledge based bureaucracy in the Legislature,  the Leadership of the Assembly has prioritized capacity building of the staff.

According to him; ” We will continue to encourage training and retraining of staff of the Assembly. Our ultimate goal is to bequeath on the Assembly, competent staff with cutting edge skills that can compete favorably with their counterparts anywhere in the world. If you measure our progress as at today, I can tell with all sense of modesty that we are already ahead of so many Houses of Assembly in the country. We will sustain this pace”.

“Another area of focus by the Leadership of the House is to create a serene working environment in the Assembly Complex. We hope to transform this environment to a beautiful, well lawn, with proper landscaping, Complex”, he said.

The Speaker added that; “Above all, we believe strongly in the welfare of the staff of the Assembly. A happy worker is a productive worker.  When we came on board, with the support and understanding of PASAN, a lot of issues that were causing agitation in the Assembly have been resolved. Staff now receive their outfit allowance along with their salary on the month of their employment anniversary. There is also monthly release of funds to the Clinic for purchase of drugs, there is quarterly release of the sum of Three Hundred Thousand Naira to the staff welfare scheme, early payment of Christmas bonus to staff, medical assistance to staff, just to mention but a few”.

The  Delta State House of Assembly,  he said  is workers friendly and promised that the House will never renege on this,  saying that; “On this note, on behalf of the Leadership of the Assembly, I wish to specially thank all the retirees for their meritorious service to the Assembly in particular and to the State in general. I pray that as you have stepped into this new phase of your life, God will protect, sustain and keep you in good health”.

“Today’s  occasion is special because it is filled with a lot of emotions. Some of you that are here and still in service are thinking about life after retirement, while those of you already in retirement are having nostalgic feelings of your days in service. Both feelings are indispensable for us as humans. Celebration like this one do not happen every day but once in a while”, the Speaker said.

He also said that;  “We are here today to rejoice and celebrate these retired members of staff who used their productive years and time to serve the Assembly. We thank God for your lives because it is not easy to start a race and finish well. You may not have accomplished all you set out to achieve in the course of this journey but my joy today is seeing you hale and hearty and in good spirit. I want you to know that retirement is not the end of life but simply a curve in life after the mandatory 35 years of service or attainment of 60 years of age”.

In his words;  “As we rejoice and celebrate with you today, I urge you not to let your new state of life overwhelm you; there is still so much you can achieve after retirement from public office. Now is the time for you to give back to society your wealth of experience. I encourage you to be active in your community and be of more service to humanity. I want to make it clear that a ceremony like this has not been done for over a decade now and we will continue to give the retirees a sense of belong”.

The Clerk of the Delta State House of Assembly,  Mrs  Lyna Aliya Ocholor, Esq  said in her speech that;  ” I want to appeal to our beloved Senior Citizens for the delay in celebrating them. I would rather wish to appreciate you for your amazing contributions to the Legislature. We shared an inexplicable bond and moments with you as boses and colleagues. We have been privileged to interact with you over the years”.

” I will not end this address without expressing gratitude to the Speaker and the Principal officers for their fatherly disposition towards staff and this time extending such gesture to our retirees,  some who retired from the Assembly for over ten years ago”, she added.

On her part, the Chairman of  the Delta State  House of Assembly Service Commission, (Chief)  Mrs  Josephine Ada  Kachikwu, Esq who was represented by Mr Ebireri Ohwo Sunday, first Member of  ( HASC) lauded the Leadership of the Assembly for the kind gesture done to the retired staff.