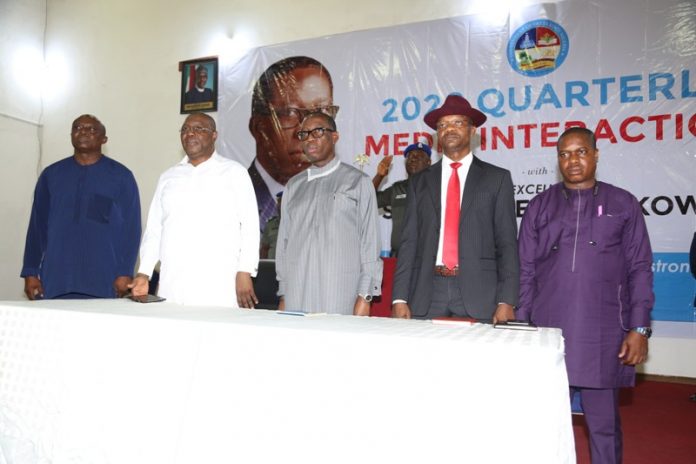 As the world battles with Coronavirus, Delta Governor, Senator (Dr.) Ifeanyi Okowa, has asked Nigerians to brace up for the multiplier effects of the disease that could affect their socio-economic lives.

The governor made the call at a quarterly session with the media in Asaba today Thursday, and said that the virus had made the price of oil in the international market to tumble and had also caused many industries to stop production.

He said that unless urgent steps were taken to check the effects of disease also known as Covid-19, many states in the country may not be able to pay salaries of workers.

He prayed that the situation would not be as it was in 2015 when the country was “technically on recession.”

Okowa said, “now that we have mass production of oil which constitutes our economy, mostly due to the fact that our oil is not being sold and oil prices have also gone down, it is obvious that each and every one of us, our states and the nation will have challenges even with execution of budgets for the year.

“At the federal level, a committee has already been set up to look into the issue of the reconsideration of the benchmark and that benchmark that will be eventually arrived at will impact on us.

“We have to be able to wait for the Federal Government to arrive at a new benchmark on the price of oil, because it is that figure that we as states will use in considering the likely revenue allocation we will be getting in the remaining months of the year.

“So, there is no doubt that our budget is likely going to be threatened and we know that any part of the threat affects more of the infrastructural development which our people desperately yearn for.’’

He thanked the media for support and the partnership they had been giving his administration “by reporting our activities to the public because, the public have a right to know what we are doing as a government.

“We have continued to do the best that we can under the very trying conditions that we are facing as a state and as a nation; we have tried to pass the 2020 budget early.

“We have tried to do our best to implement it although the events of the last few weeks have threatened the revenue of our nation which is oil.

“We have continued with the development of our roads, schools, hospitals and other programmes that have been very meaningful to our people which include the contributory health scheme, particularly for the vulnerable in our society.

“They are mainly those who are under the age of five and pregnant women; consideration is also given to widows and we hope that when things improve, we will endeavor to include the elderly and the physically-challenged.

“We have become a role model as a state and other states are coming to copy what is going on in the health insurance programme; though, we are leading the way, it still does not mean we have gotten to where we ought to be.

“At the moment, we have set the ball rolling and we are very hopeful that we continue to be very impactful on our people as over 660 people have already enrolled in the programme and we will continue to urge Deltans to avail themselves to be in the scheme.

“We are still very focused on the improvement and empowerment of our youths and women, and we are still trying to do more for them through the Job Creation Office, Ministry of Youths Development and Ministry of Women Affairs.

“This is because, as a government we must find a way to stabilize our mothers who do not have any source of livelihood so that the homes can be sustained.’’

“We are doing all that we can to ensure that Delta remains peaceful enough for our people to live in but, there is a lot to be done in security measures.

“Recently the South-South governors have taken the decision that there was a need to collaborate for us to have a regional security outfit that will work with the security agencies to ensure that our regions are properly secured.

“The reason is because we have shared facilities – roads, waterways that connect us and therefore, there is need to protect our people and quickly intervene in any criminal activity.

“We need to have a common approach to the development of various sectors of the economy, including agriculture, education, health and particularly the engagement and empowerment of our youths.

“We have found that if the youths are properly engaged, they will not fall into criminal activities; so, we hope that with the reintroduction of the BRACED Commission and the support from the state governments, we will be able to tackle some challenges facing this region.

“We are also focused on skill acquisition and we are trying to increase the number of technical colleges to enable our children have more opportunities to acquire vocational education while undergoing their basic secondary education.

“In the course of this quarter, we have already awarded contracts for nine technical colleges and I can confirm that contractors are on site as it will create better opportunities for our children to acquire secondary school education with technical skills which will further empower them to have greater future.’’