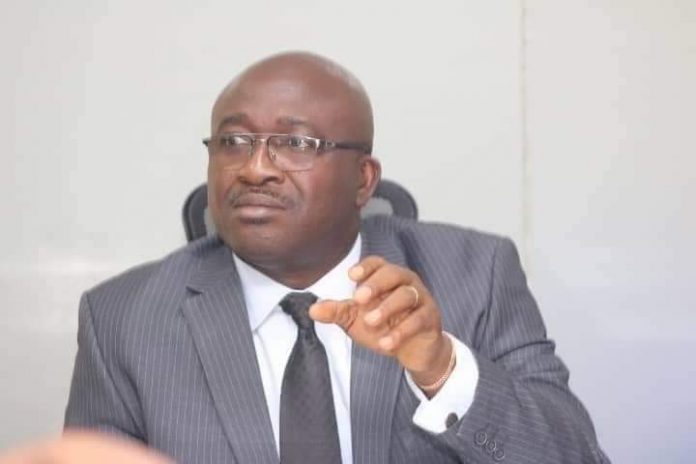 The Delta State Government has warned prospective contractors who are eager to  handle school projects in the state to desist from acts capable of painting the government in bad light.
Speaking on the new trend of people snapping dilapidated classrooms and posting on Facebook or sponsoring negative stories in newspapers, the state Commissioner for Basic and Secondary Education, Chief Patrick Ukah, over the weekend, warned that the state government would not be stampeded into renovating such schools.
He wondered why any right thinking individual could snap a dilapidated block of classrooms and leave completely  renovated classrooms in the same school and post on Facebook.
Chief Ukah disclosed that investigations into such matters had revealed that such occurrences were linked to desperate contractors who wanted  to be awarded contracts to renovate such schools, as well as other mischief makers.
The Basic and Secondary Education Commissioner said that the report of the consultant on the mapping and auditing of all primary and secondary schools in the state would soon be submitted to enable the government to begin a systematic approach of addressing infrastructural needs of schools in the state.
Chief Ukah disclosed that a lot of work had been carried out in public primary and secondary schools across the state including supply of furniture, renovation/reconstruction of classrooms, fence, toilets, offices and procurement of equipment and tools for technical science and ICT between 2015 and now.
He specifically said that above N1billion Naira have been spent within the period under consideration on 34 projects in Sapele Local Government Area alone, adding that the renovation of classroom with office and furniture for teachers and pupils of Ikeresan Primary School, Ikeresan, in Sapele Local Government Area, had been proposed for Universal Basic Education (UBE) intervention.
Chief Ukah stated that reconstruction and renovation works, as well as supply of teachers and students/pupils furniture is presently ongoing, advising the people to be patient as all schools in the state cannot be attended to at the same time.