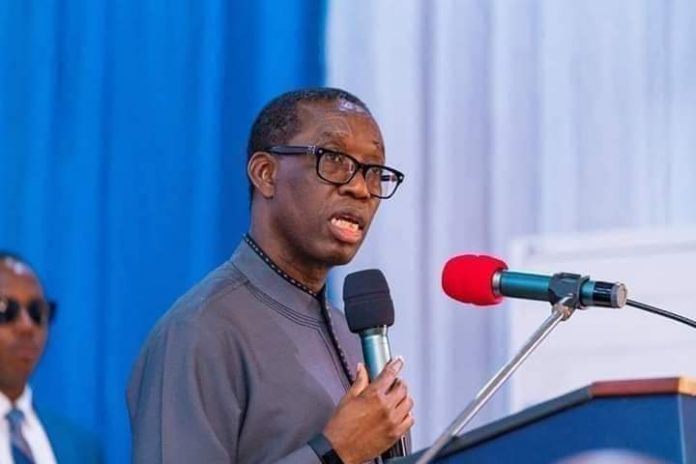 Governor Ifeanyi Okowa of Delta has threatened to apply stricter measures to check disobedience of the state government’s directives on the lockdown in the state over the COVID-19 pandemic.

This is at the backdrop of Nigeria Centre for Disease Control (NCDC) announcement on Tuesday that a confirmed case of the virus had been recorded in the state, the first.

In a broadcast in Asaba on Wednesday, Okowa commended Deltans who had strictly adhered to the lockdown regulations from April 1, 2020, but warned that enabling laws would be applied on those disobeying the directives of sit-at-home.

He expressed appreciation to all Deltans and non-Deltans in the state for their cooperation, saying “we are on day 8 of the lockdown and I know that a lot of our people have been cooperating with the directive of the government.

“Unfortunately, a few persons have tended to disobey orders and I want to urge every Deltan that from today onwards until the 14 days, to please, for the sake of everyone, for the sake of humanity, obey the orders of government, otherwise, they will be caught up by the arms of the law.

“The lockdown order was given because it was necessary; it is also lawful, because, I have already signed into law a regulation which empowers us to take action against those who would disobey the lockdown order.

“I want every Deltan to appreciate that it is for the good of the public; for all Deltans who have cooperated with us, I have sent messages of encouragement; I thank them.”

The governor announced that the State recorded its index case of the pandemic on Tuesday, April 7, 2020, and that the patient had already been moved into one of the four management centres of the virus in the state.

According to him, the person in question has been in Delta for some weeks, so, he did not just come in from another state during the course of the lockdown.

Okowa said, “at the moment, we are doing our tracking; we are getting more information on the case and when we have more information we would be able to communicate to the state, but, it is the right of that person only to be able to publicly tell us that he or she is infected.

“It is not for me to release the name; it is for me to pass information that needs to be passed to Deltans but, the person did not come from another state, he has been within the state in the last few weeks.

“I also want to use this opportunity to appeal to all Deltans to pray for our health staff and to support them to succeed.

“For those of us that have been watching the television, we can see that a lot is being done by other countries to encourage the health staff and there is a need to support them and to pray for them at this moment when they are very likely going to be overworked and exposed.

“By God’s grace, we are very prayerful and we hope that none of our health staff will ever contract the virus.”

“To our health staff, I want to make a very special appeal; this is the time for all health staff, particularly those trained and those that may be called up in the future for training and support, to please show all commitment and passion that is needed for the state and for all of us to win this battle.

“For the doubting Thomases, COVID-19 is real; it is not for the rich or the poor; it could affect anybody and I will appreciate it if all Deltans would have this at the back of their minds that anybody and everybody is vulnerable—both the old and the young are vulnerable.

“I want to urge us all to continue to observe the rules that we have put forth—washing of the hands regularly with soap and water, and when that is not immediately available, use hand sanitisers as it is important that we stress the need for social distancing by trying as much as possible to be about 6 feet apart from the next person.

“We must try to refrain from using our unwashed hands to touch the eyes or the mouth or the nose because if your hand is already contaminated, it is an easy way of getting the virus into your system.

“For those who have cough, please, stay at home and if you need to cough, cough into your bended elbow and if you cannot do that, get a piece of tissue and cough closing your mouth; that tissue must be immediately discarded and your hands must be washed.

“For those who feel sick or having a fever or cough or you feel breathless or unable to breathe, it is important that you do not hide yourself at home; call the numbers we have released to each and every one of us and those numbers have also been released to all our council chairmen.

“You may also call your doctor, but, we want to urge that for those who have the symptoms, including fever, cough and breathlessness, as much as possible, it is best to call these numbers or any of these persons.

“If you know the executive secretary of your local health authority in the council or the disease surveillance officer, call them because, we do not want patients just running in to every private clinic or medicine shop who may not be able to manage you or know exactly what to do,” he added.

The governor urged private clinics, to contact government officials, including the Commissioner of Health and local government chairman or the disease surveillance officer or the executive secretary in charge of the local health authorities when anyone with the symptoms reached them.

“You must communicate to the appropriate authorities,” he stated.

Okowa advised the people to use facemasks, saying “yes, a lot of argument have been going on about this, but there is also a lot of support from the various countries that have had several cases of the Covid-19.

“In Delta, we are already in the process of producing facemask for our people and when produced in the next few days, we would progress to distribute to our people, free of charge.

“We have also started a food bank, and by the grace of God, in the next few days when we have been able to get enough, we would be moving the food to support our people in the various villages, towns and wards of the state.

“We want to thank all Deltans that have made contributions; thus far.

“There are three bank accounts that have been opened for those who want to support our activities as a state concerning Covid-19 and it is my prayer that as many that think the need to support the less-privilege, please do make your contributions whether big or small.

“I must truly thank our people who have made a lot of commitment and those who have already fulfilled their commitments; a lot of Deltans have made donations and very soon, we would be publishing the names of all those who have supported us in the course of raising the food bank.”

He said that the pandemic was not a “death sentence” but cautioned that such did not mean that it should be taken carelessly.

The governor also called on the peopleant to stop all forms of rumour mongering about the pandemic, especially in the social media.

He said it was unfair to say things when we knew that they were not true.

According to Okowa, there has been a lot of insinuation concerning the fact that a member of the House of Assembly of Delta has contracted this infection; that is not true.

“No member of the House of Assembly has contracted Covid-19; it is important that I put the records right, but whosoever that contracts it, it is not a death sentence neither should any person be stigmatized in any form.

“All we owe such persons is to pray for them for speedy recovery.

“As at today, we have four management centers and each of the centers also has its isolation wards; we have holding centers in several other places where persons who are initially suspected  to have contracted the virus can be kept.

“All those that need to be trained – doctors, nurses, laboratory scientists, drivers, cleaners and all other persons that would be needed in the case management, including pharmacists, have been trained and if the need arises, we will train more persons.