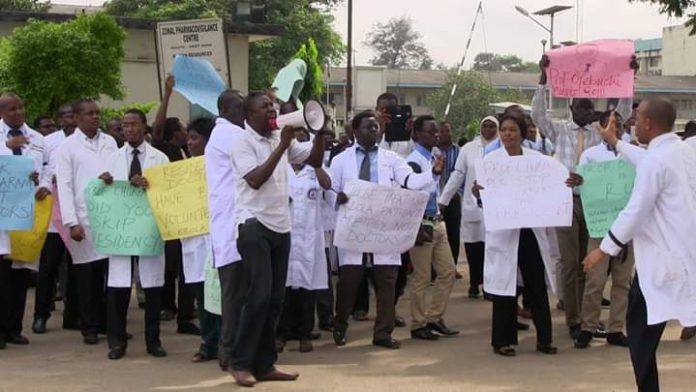 Doctors in the Federal Medical Centre (FMC) today embarked on an indefinite strike over what they described as persistent harassment from security agencies and the police in particular.

The doctors, under the auspices of the Association of Resident Doctors of Nigeria (ARDN) FMC Asaba Chapter said they embarked on the strike because of their security could no longer be guaranteed.

The President of ARDN, FMC Asaba Chapter, DrNwabuno Osifo, while addressing the press at the temporary Press Centre of the Nigeria Union of Journalists (NUJ), Asaba, today said the strike will persist until issues concerning their welfare and safety are adequately addressed.

Dr Osifo recounted how the police in Okpanam brutalized some of its members, saying tear-gas was released on doctors even when they had identified themselves, adding the attack was one too many.

While noting that they were exhibited any trait of callousness by embarking on the strike at a time when their services were most in need, Dr Osifo stressed that the doctors also needed to be alive in order to be useful, noting that the first law of nature was self preservation.

Dr Osifo acknowledged that although the State Governor, Senator Ifeanyi Okowa was intervening on the issue, alongside the Commissioner of Police, Mr Hafix Inuwa, “We want to send a clear message to the police authority that they cannot continue to flout the presidential order on medical and health workers free access of movement to and from their places of work, and until the matter is adequately resolved, we remain on strike indefinitely.”

Responding to question on whether the affected doctors were able to identify themselves properly, Dr Osifor stated that every medical and health worker had a valid ID card and the issue of identification does not arise, saying the association had early appealed to the CP to call his officers to order, noting that the issue of harassment started two weeks ago.

On how the strike action negate doctors ethical practice, the ARDN president said “It is a common law of nature that before you save somebody, your safety should be guaranteed first; we are responsible and highly professional; we don’t down tools on flimsy excuses, but this concerns our safety and we will not resume until that is guaranteed. If our safety is not guaranteed, particularly as it concerns our agreement with security agencies, we will not resume work.”

According to Dr Osifo, certain conditions must be met before the residents doctors will go back to work.

“We demand a firm statement from the police authority that no medical or health worker should be harassed if they tender their ID card.

“Items destroyed should be replaced immediately.

“Adequate security should be provided within the confines of the hospital.

“We call on the FG and state government to note that there is paucity of health kits, no life insurance and other incentives that boost productivity of frontline health workers.

“Hazard allowance of N5, 000.00 monthly is too small and increasing it will boost the morale of health workers,” Dr Osifo stated.