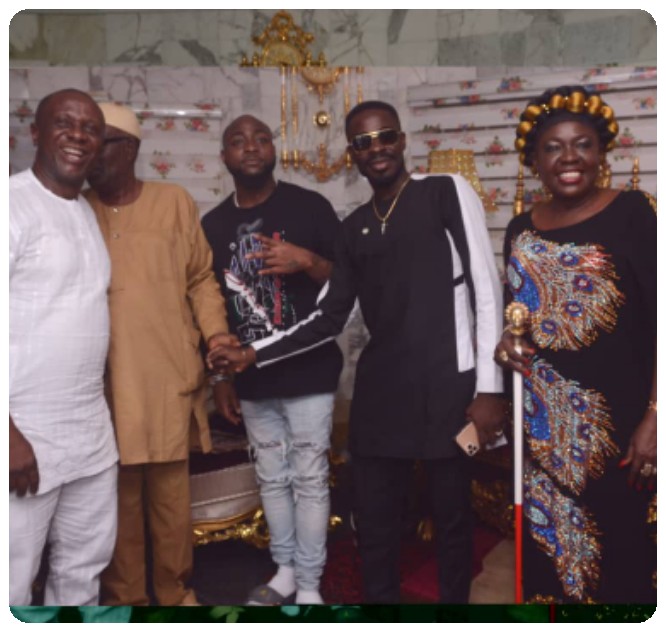 The Chief Whip of the Delta State House of Assembly and Member Representing Oshimili North Constituency in the House, Hon (Princess) Pat Ajudua, says she will remain grateful to God for His blessings upon her family.

Hon Ajudua stated this at the dedication of her grandson, Kolisa Junior Bobo-Ajudua at a Church service in Ibusa, Oshimili North Local Government Area.

The Church Service was attended by Nigerian born hip hop star, David Adeleke, popularly known as Davido, his wife, Chioma and their son, who accompanied the parents of Kolisa, Bar Bobo-Ajudua and Mrs Naomi Bobo-Ajudua on the baby’s first visit to Delta State.

Hon Ajudua said God has brought good fortunes to her family with the gift of the first grandchild, and prayed God to preserve his life and take him to greater heights.

The lawmaker had earlier received his son and Davido with their families at the Asaba airport, supported by her constituents, mostly women, before they moved in a convoy to Ibusa.

At Ibusa, her husband, Chief Fred Ajudua welcomed his grandson to his country home, together with friends, family members and well wishers.

The reception was attended by some political bigwigs in the state, where Chief Ajudua also prayed for God’s protection and well-being of the children.

Another reception was held in honor of Kolisa, Naomi and Bobo-Ajudua, in company of Davido and family at the official residence of Hon Pat Ajudua at the legislative quarters, Okpanam road, Asaba.

The Speaker of the State House of Assembly, Rt Hon Sherrif Oborevwori led some Principal Officers and members to House number 5, the venue of the reception to rejoice with Ajuduas.

The Chief Whip, during Wednesday’s plenary of the State House of Assembly, thanked the Speaker, and members for joining her to receive and dedicate her grandson to God.