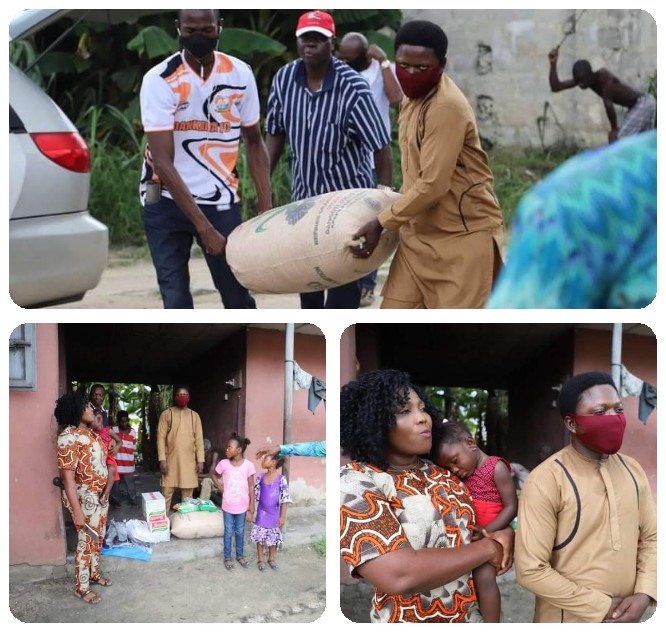 The Inmates of Jeddo Leprosarium on Thursday heave a sigh of relief from the hardship caused by the pandemic Covid-19, as the Personal Assistant to the Speaker of the Delta State House of Assembly on Still Camera, Mr Emmanuel Ojighodovwan donated food items, clothes and detergent to them.

Mr Ojighodovwan accompanied by his wife and children, sympathised with the inmates and assured them that God will take charge of their case.

He said the gesture was his own way of mitigating the hardship caused by the pandemic covid-19 and urged them to share it among themselves judiciously.

The P.A to the Speaker who assured the inmates of regular support, disclosed that, he has procured one hundred school uniforms for primary school pupils which will be distributed free of charge to indigent children in Okpe LGA as soon as school reopens.

He stressed that, the gesture was his own of keying into the empowerment programme of his boss, the Speaker of the Delta State House of Assembly, Right Hon Sheriff Oborevwori who is generally regarded as the “Empowerment Master”.

Mr Ojighodovwan, a veteran journalist who hails from Amuokpokpor community in Okpe LGA promised to use his resources no matter how meagre, to touch the lives of the common man and give back to the society.

He thanked Right Hon Sheriff Oborevwori for his appointment and prayed God to continue to bless him and grant him more wisdom to pilot the affairs of the House.

Mr Ojighodovwan noted that, Right Hon Sheriff Oborevwori has led the House to enact laws that has touched the lives of the common man and has worked with the State Governor, Dr Ifeanyi Okowa in bringing the dividends of democracy to Deltans.

He added that, Right Hon Oborevwori has provided qualitative representation for Okpe Constituency and has attracted several development projects to the constituency as well as initiated several life changing bills, des