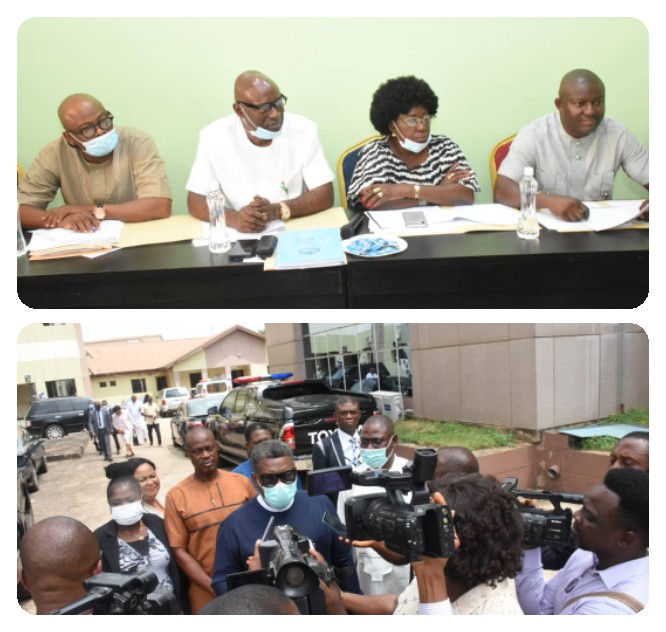 The Delta State House of Assembly Committee on Health has enjoined the State Ministry of Health and its various parastatals to continue to discharge their duties professionally and ensure that activities and programmes at the state health sector were not compromised.

The Chairman of the Committee, Hon Austin Uroye gave the charge in Asaba when the state Commissioner for Health, Dr Mordi Ononye led top officials of the ministry to appear members to defend the 2021 budget estimates of the state ministry of health.

Addressing the Commissioner and his team, the Chairman , Assembly Committee on Health, Hon Austin Uroye commended the Ministry for what he described as its proactive disposition in the fight against the dreaded and deadly Corona Virus Pandemic in the State.

Hon Uroye, flanked by other members of the committee, including Honorables Pat Ajudua, Emeke Nwobi, Festus Okoh, Kenneth Ogba and Charles Oniyere, enjoined the Ministry to continue to brace up to the current challenges in the health sector and ensure that Deltans and indeed residents of the state get the best in relation to their health needs.

The Lawmaker specially commended the State Governor, Dr Ifeanyi Okowa and other critical stakeholders in the health sector for their efforts in containing any disease outbreak in the state.

He said Delta State, no doubt, did exceptionally well in checking the spread of the novel Covid 19 virus in the state, stressing that more should be made in managing whatever health crisis in the state very well and promptly too.

Hon Uroye described the Ministry as very dear to House, explaining that as a State, they cannot afford to compromise activities in the Ministry because of its importance to the health and wellbeing of the generality of the State and its citizens.

He urged the officials to continue to be at their best in the discharge of their professional duties.

Briefing the Committee members, Commissioner for health, Dr Mordi Ononye assured Deltans and indeed, residents of the state, that the Ministry is irrevocably committed to its policy of adequate health care delivery in the State.

He said the Ministry will continue to discharge its duties professionally, just as he reassured the people to expect robust and affordable health care services in the 2021 fiscal year.

On the current health challenge in some parts of Ika North East local Government Area of the State where it was reported that some youths have died mysteriously, the Commissioner said that the Ministry is already working round the clock to unravel the cause of death in the area.

Dr Ononye stated that so far, the ministry have been able to identify persons who were ill and have moved them to the various hospitals and have sent samples of the patients to the various laboratories in Asaba, Irrua, WHO in Lagos as well as to the Lagos University Teaching Hospital, so that at the interim, they may be able to identify the cause of the mysterious deaths.

The Commissioner was accompanied by the Permanent Secretary in the ministry, Dr Minnie Osaji and heads of various parastatals in the ministry of health.