Home News King Botu Speaks On State Of The Nation As He Marks Birthday,... 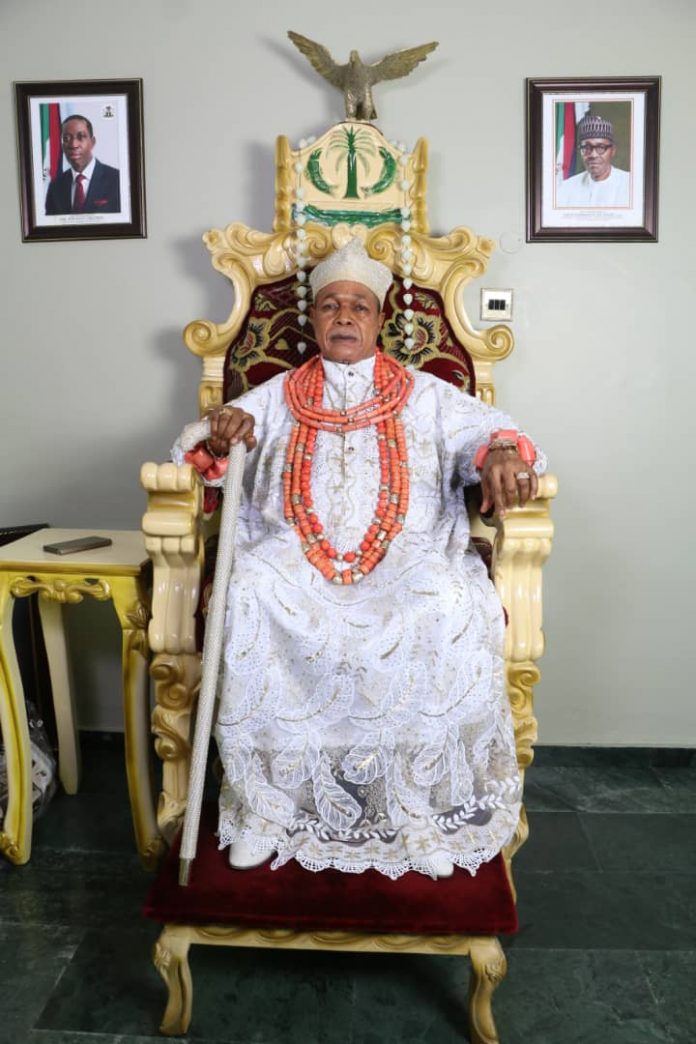 The paramount ruler of Siembiri kingdom, in Burutu local government area of Delta State, King (Dr) Charles Ayemi Botu, JP, OFR, has called on well meaning Nigerians to speak out against the despicable, pitiable and unhealthy state of Nigeria as a nation, particularly the Niger Delta Region.

Speaking during a thanksgiving service at St. Anthony’s Catholic Church, Okpokunou, to mark his 73rd birthday and 27th coronation anniversary, King Ayemi-Botu, also known as “Lion of the Niger”, attributed the problem to massive corruption at both federal and state levels.

King Botu, a former National Chairman of TROMPCOM, stressed that there must be concerted efforts to right the wrongs of the past as well as massive human and infrastructural development across the country, most especially the oil bearing communities.

He said “The state of our beloved country, especially the Niger Delta region should be of great concern to every well meaning Nigerians. The problem was caused by massive corruption, avarice, nepotism, winner-takes-all syndrome, bigotry and ethno-religious dimension, that is being perpetrated by political leaders both at federal and state government to their selfish ends and detriment of those who elected them”.

The Monarch who was obviously touched by what he described as total negligence of the people, called for proper development of the Niger Delta region to equate with the level of degradation being suffered in the area as a result of oil exploration and exploitation.

King Botu explained that he was in the fore front for the agitation for the creation of 13% derivation fund, the NDDC and DESOPADEC, stressing that what is happening in the two interventionist agencies was not what was bargained for.

“The law passed by the Delta State House of Assembly made the derivation fund 50/50. The government has 50% and the oil Producing communities 50% of the 13%. Despite this legal document, contractors are not paid for jobs executed, ongoing jobs abandoned since 2018 and no new jobs awarded, undermining the fact that Delta State is the highest in oil production”.

“For NDDC, it is unfortunate that Mr President decided to allow Akpabio to be messing up with the interventionist agency. Unhealthy politics has enveloped the Commission”, King Botu lamented.

The First Class Ijaw traditional ruler tasked the Federal and State Governments to monitor closely activities of the Interventionist Agencies to ensure they deliver their mandate to the people.

“The federal and state Interventionist agencies of NDDC and DESOPADEC are to alleviate and provide food and shelter to the age long, grossly marginalized people of oil bearing communities. Some persons are now carting away same funds, using their political might to control the oil wealth at their whims and caprices hence the unending call to restructure Nigeria without further delay”.

“Sir Lord Frederick Lugard’s one hundred years Treaty (1914 to 2014) that Amalgamated the Northern and Southern Protectorates that metamorphosed as Nigeria has gone to oblivion since 2014. Basically there is no foundation to remain as a federation because the treaty has not be renewed that is why there is absolutely urgent need to convoke a sovereign national conference which Jonathan failed to act upon. Nigeria is presently standing on a sandy soil and bound to collapse anytime”.

“In anticipation of 2014 expiring date of treaty, It is on record that due to the precarious political situation in Nigeria, I made a press statement in 2012 calling on the then President Goodluck Jonathan to convoke a Sovereign National Conference of all ethnic nationalities to redefine the destiny of Nigeria, either to remain as one entity or not, since the Lord Lugard’s doctored treaty will end in 2014. To my greatest surprise he rebuffed my wise counseling due to lack of foresight”.

“Although at the twilight of Jonathan’s Administration in 2014, it dawned on him to dream of a National Conference which was consigned to the dustbin by his successor President Buhari. But today Jonathan is being judged by posterity for his ineptitude. No wonder in the recent debate he differed by saying that restructuring alone is not the solution to the myriad of problems in Nigeria but suffice to say that it is the key and hallmark to a lasting peace and in addition it is the kernel and foundation of America’s Presidential System of Government which Constitution we imported but not being practice to the later”, the Monarch stated.

King Ayemi-Botu remarked that Nigeria cannot be better off in the hands of the colonial masters than its citizens, and called for a better deal for Nigerians, especially the people of Niger Delta region as the region is the economic life wire of the country.

He explained that restructuring will among other things allow regions control their resources, including Oil and gas, solid minerals, Coaco and others, while Government manage it.

The Monarch appealed to both Federal and States Government to pursue policies and programmes that would improve the living standard of Nigerians.