Delta State Chairman of the Nigeria Union of Journalists (NUJ), Comrade Michael Ikeogwu, has said that the passage of the father of the governor of the state to the great beyond was a loss not only to the immediate family of the departed, but to Deltans and people of good will.

Comrade Ikeogwu stated this at the Government House in Asaba, the state capital, when he led members of his exco to condole Governor Ifeanyi Okowa on the demise of his father, Pa Arthur Okorie Uzoma Okowa.

The labour leader extolled the exemplary character of the departed not only as a renowned teacher, community leader and organiser, but a man who loved western education so much that he ensured that the governor got the right education, adding that the Sapele Chapel of the NUJ in the state had concluded plans to make Pa Okowa its patron before the sad news of the octogerian came.

Comrade Ikeogwu urged Governor Okowa and members of his family to bear the loss with fortitude, believing that the departed Pa Okowa led a fruitful and fulfilled life according to the will of God, adding that the governor should continue to transmit the essences of the departed patriarch of the Okowa family in humanistic uplifting.

Responding, the governor thanked Comrade Ikeogwu and members of the union for the visit, saying that he had been greatly relieved by the kind words from the union about his father, adding that his father was not only a teacher, but a writer, a lover of knowledge, who trusted in the will of God at all times and impacted positively on all that came his way.

On the train of Comrade Ikeogwu to condole the governor were the Vice Chairman of the NUJ in the state, Comrade Salvation Ogono, the Secretary, Comrade Patrick Ochei, Treasurer, Comrade Mordi Joy, Auditor, Comrade Celestine Aforkoba, among other members of the exco. 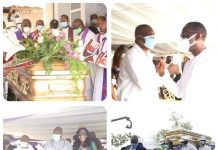