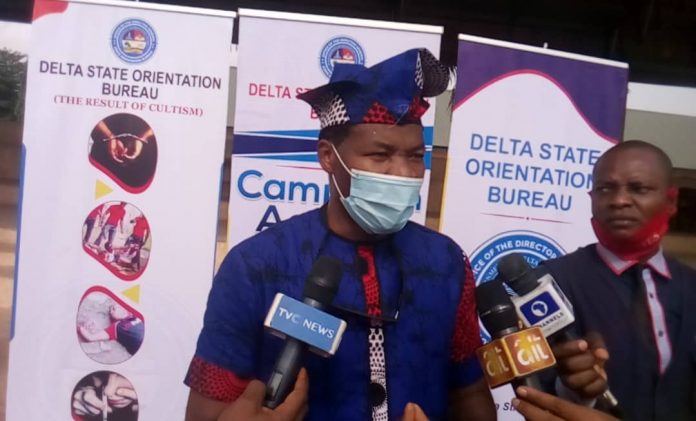 The Delta State Orientation Bureau has kicked started a sensitisation advocacy against drug abuse and cultism with a call on secondary school students to shun the twin social menace in the state.

Speaking to the students at the Government Model Secondary School, GRA, Asaba, the Director General of the bureau, Eugene Azuka Uzum, a lawyer, advised against having anything to do with cultism or any other social menace in the society, adding that students should shun the erroneous belief that membership of any cult bestowed special advantages on an individual in the society.

He said that many unfortunate killings and dastardly criminal acts in the state and beyond could be traceable to drug abuse and cultism, wondering why one would choose to maim and ruin ones future, if not for the ignorance of the danger inherent in the hydra headed social menace in the society.

The orientation helmsman disclosed that in line with the actualisation of the Stronger Delta vision of the Okowa Administration, the bureau had come up with the advocacy, target at nipping the growing bud of drug abuse and cultism at the lower level of secondary school before it sprouted and grew to uncontrollable destructive social menace at the tertiary institutions in the state.

Uzum disclosed that apart from the present sensitisation exercise by the bureau to as many select schools as 90 across the three senatorial districts of the state, plans were also afoot to collaborate with critical stakeholders in the fight against the menace of drug abuse and cultism, just as he said that secondary school students would be encouraged to form social clubs to brainstorm on the danger inherent in social menaces in the state.

Speaking after the kick off of the exercise the Government Model School in Asaba, the Senior Prefect in the school, Master Ekwemara, thanked the state government and bureau for the advocacy visit to the school, saying that he would continue to drum home the need for his colleagues to shun cultism, drug abuse and other social menaces that would not only create insecurity in the state, but could destroy their future.

The sensitisation continues to other parts of the state for over two weeks from now.