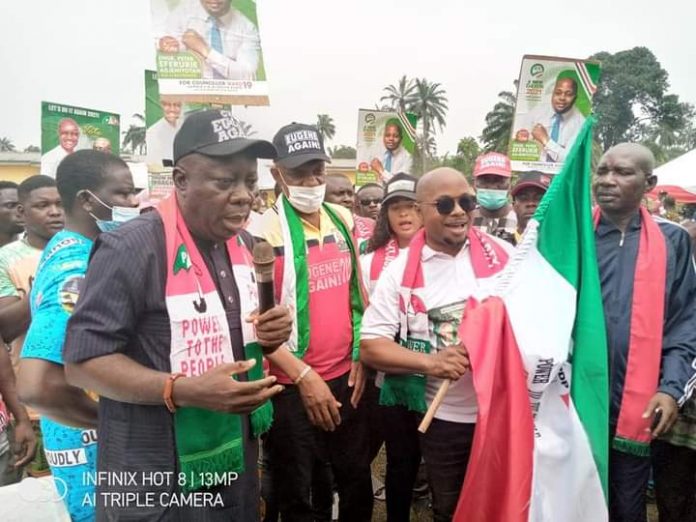 Ahead of the March 6, Local Government elections in Delta State, the People’s Democratic Party, PDP, in Sapele Local Area of the state on Thursday flagged-off its campaign with the presentation of party flags to candidates that emerged as the Party’s flag-bearers from wards to contest the councillorship positions.

The Director General of the campaign in the council, Honourable Julius Egbedi, who led other party chieftains visited wards 20, 19,18,17,16,15 as the LGA party Chairman, Honourable Chief Perkins Umukoro, received hundreds of APC decampees to PDP.

Our correspondent reported that the chieftains took turn to enumerates the PDP success stories across the wards and appealed for votes for the party, come March 6 for continuity.

It was like a carnival in each of the wards visited as PDP supporters came out in their numbers to welcome their guests.

But it was different at ward 18 as the supporters rollout local drums to welcome their arrival as everyone including the PDP campaign Chairman, Honourable Julius Egbedi, Chairmanship Candidate, Honourable Eugene Inoaghan, among others danced to the admiration of all.

At ward 16, the Chairman of the party in Sapele Local Government Area, Chief Perkins Umukoro, received over 500 decampees from the APC to PDP.

Speaking to the teaming supporters in each of the wards visited, the PDP Chairmanship Candidate, Honourable Eugene Inoaghan, who is seeking relection in Sapele Local Government Area, promised to consolidate on his achievements during his first tenure and appealed to the people in the area to vote all PDP candidates come March 6, this year which has been slated for the council polls.

The council campaign chairman for the polls and Commissioner for Agriculture and Natural Resources, Honourable Julius Egbedi, who enumerated some of the developmental projects in the various wards visited and political appointments given their people by Governor Ifeanyi Okowa, appealed to the electorate to reciprocate the gestures by voting for all the PDP candidates.

Some of the councillorship candidates expressed deep satisfaction to the party for granting them the opportunities to represent their people and promised to attract the dividends of democracy to their people.

Highlights of the ceremony was the presentation of party flags to councillorship candidates by the Sapele PDP Chairman Chief Perkins Umukoro.

The campaign train continues next week