Home Politics Delta 2023: I will Build On Okowa’s Achievements, Sustain Job And Wealth... 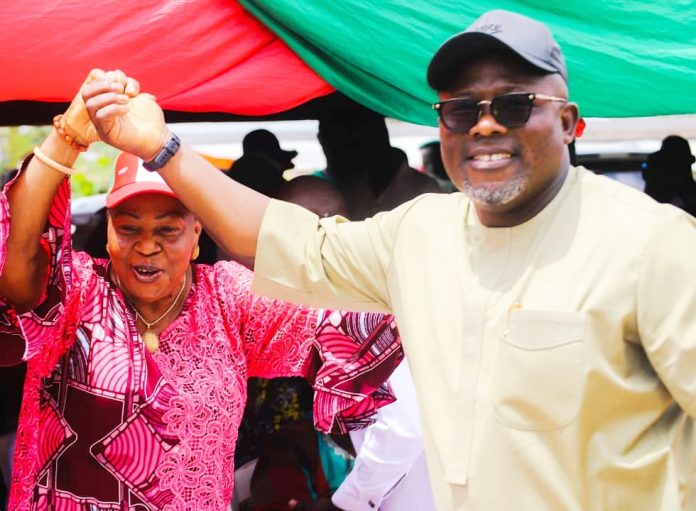 Speaker of Delta State House of Assembly and Highflyer governorship aspirant, Rt Hon Sheriff Oborevwori, has assured Deltans that his administration will sustain the prioritization of job and wealth creation, spread development on equal basis to the three senatorial districts, if elected governor in 2023.

Oborevwori disclosed that the three senatorial districts will experience uncommon socioeconomic and infrastructure development in line with the high standards already set for the state and subsequent administrations by the incumbent governor and state party leader, Senator Dr Ifeanyi Arthur Okowa, who he described as a visionary leader, a promise keeper and a disciplined top technocrat.

The most sort after 2023 governorship aspirant who will obviously emerge as PDP’s flag bearer said, Ndokwa and Oshimili people are highly hospitable, friendly and unique in many ways, judging from their accommodating nature, adding that he will partner with the leaders to ensure that their yearnings and aspirations in terms of enhanced development and other considerations were factored into his priority agenda if elected governor.

“This meeting is to ask for your total support; leaders and party delegates. Support me to fly our party’s flag in the 2023 governorship election.

“I have what it takes to step into the large shoes of our performing leader and governor, Senator Dr Ifeanyi Arthur Okowa. It requires hard work, transparency, open door policy, accountability, humility, accessibility and honesty. I have demonstrated these qualities in the past five years as the speaker of our state, and still counting.

“I believe in one God, one Delta and one People. The wealth of Delta is for all Deltans and shall be used to bring substantial prosperity and development for our people in Delta North, South and Central.

“I Will not disappoint the good people of Delta State. I will not disappoint you. My office and home doors shall be widely open to receive all and sundry. You can count on me, you will surely have my ears always. This is very important.

“I hereby respectfully appeal to Party delegates to vote Rt Hon Sheriff Oborevwori. That is my name. A name you can trust, a name you can depend on and a name that will bring luck and landslide victory for PDP, come 2023.

“Our mummy is here, Chief Patience Okwuofu. She is one of my guarantors in this race to Osadebe House. Our Mummy is ready anytime to attest to my character, loyalty, pedigree and performance promise.

“She volunteered to be on my entourage, to take me hand in hand round the state. Be rest assured that your support will advance the socioeconomic and overall development of Delta State.

“I thank our party leaders and party faithfuls for the warm reception you accorded me and my entourage. Everywhere is filled to capacity. I am indeed very grateful,” Oborevwori said.

While presenting the crown prince of Osadebe House to the people, Chief Patience Okwuofu said, Rt Hon Sheriff Oborevwori is the most preferred governorship candidate, widely recommended as governor Okowa’s successor on May 29, 2023.

She urged the good people of Aniocha North and Oshimili as well as party delegates to vote enmass for the peoples choice, Rt Hon Oborevwori.

According to her, “Sheriff is one of my sons. I love him a great deal. He is humble, respectful, reliable, competent, a hard worker and a team player.

“He is a good choice, a sellable candidate. His candidacy guarantees landslide victory for our great party, PDP. Look no further, Sheriff is our choice.

“He respects constituted authorities, not proud, not disrespectful and above all he has proven to be a trusted leader with required capacity to advance the socioeconomic and infrastructure development of Delta state. His MORE agenda is the ideal model for the state, going forward.

“My son, Sheriff is detribalised and as the head of the legislative arm of government in the past five years, he led a team that made good laws which to a great existent facilitated good governance of the state, under the leadership of our amiable governor, Senator Dr Ifeanyi Arthur Okowa.

“I present to you, a tested and trusted leader, an incorruptible governor in waiting, Rt Hon Sheriff Oborevwori. Delta State Treasury is safe in his hands,” Chief Okwuofu said.