Home Politics Delta 2023: Oborevwori Gets The Endorsement, Blessings Of Orodje …Says The... 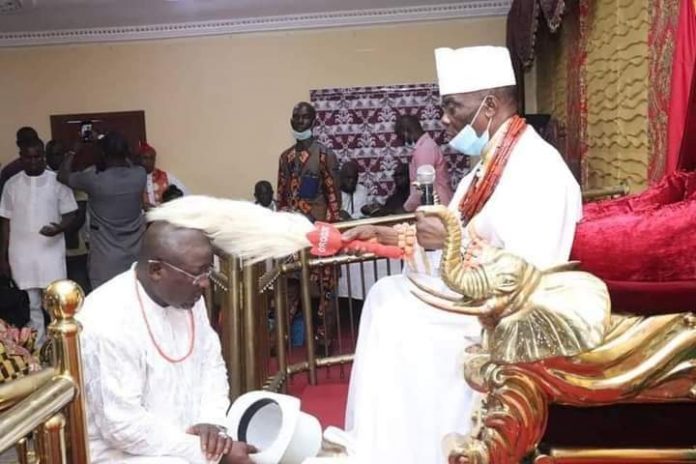 Chairman of Delta State Traditional Rulers Council, His Imperial Majesty, Maj. Gen. Felix Mujakperuo (rtd), Orhue the 1st, the Orodje of Okpe Kingdom, has endorsed the candidacy of Okpe illustrious son and the Ukodo of Okpe Kingdom, Rt Hon Chief Oborevwori, JP, as the most suitable governorship candidate to step into the shoes of the state governor, Senator Dr Ifeanyi Okowa, come May 29, 2023.

Orodje’s prayers and blessings came at the right time as another contender for the office of governor from Okpe Kingdom, Chief James Augoye appears to have graciously teamed up with his brother, Oborevwori, for a united Okpe and Delta mandate for Mr Speaker.

News of Augoye’s decision to step down for Oborevwori filtered into privileged quarters on Sunday, 3rd April as both illustrious sons of Okpe Kingdom resolved to forge a common ground to further strengthen Oborevwori’s campaign structures for a landslide victory.

Insider sources revealed that the duo will in the coming days collapse political structures and jointly partner with multifaceted political forces for the SHERIFFICATION of Delta State.

The result oriented political intercourse has obviously pave the way for a united Okpe struggle in the ongoing governorship chess game. The meeting was well attended by arrowheads and key supporters of Chief Augoye on Sunday, 3rd April at his residence. The crowd consistently roared “Augoye is Sheriffied.”

To cap it up, the Orodje of Okpe stretched forth his spotless immaculate while traditional staff of office, laid it on the Sheriffied crooner and unarguably the governor-in-waiting, Rt Hon Sheriff Oborevwori, signaling a new down in the politics of 2023.

It will be recalled that Oborevwori got massive endorsements and was subsequently adopted as the preferred governorship candidate by Delta North political leaders and delegates of the Peoples Democratic Party, PDP during the just concluded Delta North consultation tour.

While praying for Oborevwori, the Orodje of Okpe described him as a worthy son of Okpe Kingdom, competent and eminently qualified to step into the shoes of the state governor, Senator Dr Ifeanyi Arthur Okowa, adding that the cordial work relationship between the duo as heads of two separate and independent arms of government have been peaceful without rancour.

“You have proven to be a worthy son of Okpe and a patriotic Pan Deltan with required competence, maturity and capacity to take Delta from where our amiable governor will stop in 2023, to a higher level.

“Governor Okowa is the best thing that has happened to Delta State in the past nearly seven years and still counting. His tenure brought and will continue to bring remarkable socioeconomic and infrastructure development, good governance and peaceful coexistence.

“If elected as governor in 2023 by the special grace of God, you are to build on his achievements, sustain and expand our governor’s lofty policies and programmes for the development of the three senatorial districts on equal basis without ethnic or tribal sentiments.

“I pray that God Almighty grant you victory on all sides and win the 2023 governorship elections effortlessly.

Okpe Kingdom and indeed Deltans are behind you, praying for your success and at the end of it all, you will come out victorious and God alone will take all the glory,” Orodje prayed.

In his response to Orodje’s kind words and prayers, Oborevwori promise to be a governor for all Deltans, saying that he will adopt the all inclusiveness leadership style of his boss and leadership mentor, Senator Dr Ifeanyi Arthur Okowa.

According to Mr Speaker, “I am a graduating student of Okowa School of Leadership and I have developed a blueprint christened MORE, aimed at Advancing Delta beyond 2023. I will sustain and expand the governor’s policies and programmes, especially the job and wealth creation units; STEP, YAGEP, EYSA, GEST and others.

“I respectfully wish to assure you, my precious King and lovely father, that the Ukodo of Okpe Kingdom; your son standing before you will make you, Okpe Kingdom and Deltans proud if elected governor of Delta State, in 2023.

“I believe in one God, one Delta and one People. My administration will be guided jealously by the principles of equity, fairness and good conscience.

“I will also respect and ensure the continuity of power rotation within PDP family on senatorial basis,” Oborevwori assured.