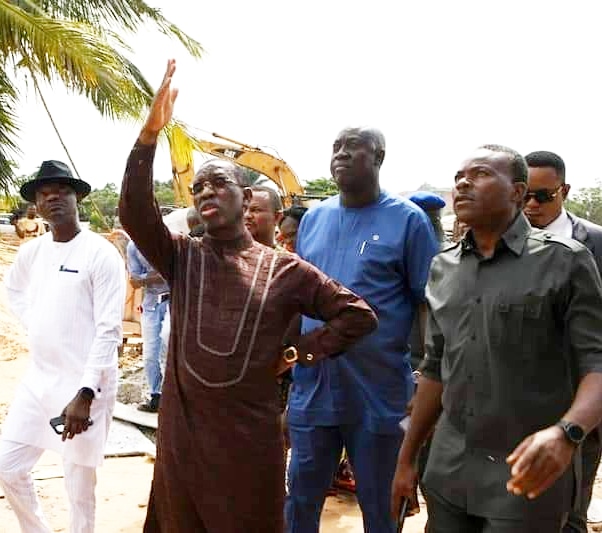 Delta Governor and Vice-Presidential Candidate of Peoples Democratic Party (PDP), Sen. (Dr) Ifeanyi Okowa, said All Progressives Congress (APC) in the state criticised everything his administration did because it had poor understanding of governance.

Addressing journalists shortly after inspecting ongoing projects at Dennis Osadebey University, Asaba on Friday, the governor said that the main opposition in the state was being mischievous in its criticisms due to ignorance.

Okowa assured that the university would wear a new look by December, 2022, when the projects would have been completed.

According to him, when people in Lagos and Abuja say that they are not seeing what we are doing, it is either that they don’t come home or that they just want to be wicked in their ways.

“We have also commenced the construction of two hostel projects in the university to accommodate students and it will be useful to us during the National Sports Festival holding in Asaba in November,” he said.

On the N25 billion loan for oil palm farmers in the state, he explained that it was not a direct loan to the state government, adding that the government was only acting as guarantor to the farmers.

“It is not a direct loan to the state government; it’s unfortunate what critics are saying because they need to be informed and if they had listened at the House of Assembly when it was brought before the lawmakers, the letter was very explicit.

“We have an economic team and when we are satisfied with a plan, we go through the State Exrcutive Council and then to the House of Assembly for approval.

“In Akwa-Ibom and Edo States, they have borrowed far more than what our people are asking for.

“This particular loan is from the Central Bank of Nigeria CBN to the oil palm farmers association in Delta State for the development of about 17,700 hectares of oil palm and It’s going to be monitored but somebody needed to guarantee it for them and that is just what we have done.

“In guaranteeing them, we followed the same process of approval and that is what we have done,” the gôvernor said.

He added that when the letter was written to the House of Assembly, the intention was clearly stated, but that the APC in the state cashed in it as it did with everything, without a clear understanding of what was going on.

“They just jump at everything, they want to criticise everything and I think it is poor knowledge on their part and that is the truth.

“I am wondering that if people are thinking of stepping into governance and they have the kind of mindset that they have in Delta State then it’s unfortunate but they are not going to have the opportunity to govern Delta State because we know them and we know ourselves.

“When some of them rise up to talk we know them because we have been in this state before and we know what each and everybody represents.

“So, I try not to talk about persons but they continue to say things that ordinarily they shouldn’t say but if you don’t want to appreciate good works then you should keep quiet and that is what I expect of them.

“I say so because Deltans appreciate what we are doing and I will like to thank all Deltans because they have continued to partner us to achieve peace and through that peace we are developing our youths, building roads and developing infrastructure in several places.

“Perhaps, when they come around they just restrict themselves to their immediate environment, otherwise they would have seen a lot of things going on.

“If they find their way to the riverine areas, they will possibly respect what we have done in those areas because a lot of our villages that were abandoned before are now liveable cities in the riverine areas.

“The loan they are talking about is a farmers’ loan and we are actually as a state government just guarantors to the loan,” he stated.

On pensions, Okowa said that only eight states were currently running the Contributory Pension Scheme in the country as 16 states had exited.

He said that the state government inherited a huge backlog of past services as a result of the pension scheme but was doing a lot to defray it.

“When we came into government in 2015, we were owing about N100 billion as past services or accrual services.

“We were able to investigate the sum and it eventually came down to about N88 billion and since then we have been paying N500 million mobthly and we have paid over N36 billion over time.

“Whether we are going to complete the payment within my tenure, that I can’t tell but we will continue to do our best.

“Even when we know the difficulty, we have refused to exit that scheme just as other states have done because it would have been much easier to exit and continue with the old pension scheme.

“But we believe in the interest of workers and we want the workers to be able to benefit and we will continue to do what is right.

“We have also made a provision of N20 billion from the proposed bridging finance to see what we can pay down for the past services,” he stated.

On politics of 2023, gôvernor said that he would not leave any work undone and encouraged Nigerian youths to embrace the PDP, adding that Nigerians would gain from the success story of the Atiku-Okowa ticket.

“Here in Delta we have focused a lot on our youths and women because they are very important in this nation.

“The entrepreneurial, vocational and technical education programmes that we have had have all been geared towards taking our youths off where they were left in pains and take them out of penury and make them self-sufficient by giving them skills that can make them to stand on their own.

“We didn’t just provide them with starter packs, we monitor and mentor them and a lot of successes have been recorded and this we will export to the larger Nigerian nation.

“Reading through the Atiku’s document ‘My Covenant With Nigerians’ what we are doing for our youths here in Delta is clearly captured in his Human Capital Development programme.

“Most other candidates are just busy talking, they don’t even have a working document, they are talking just to impress people and that is not the Nigeria that we need today.

“You just tell us where we are and what you intend to do not just to tell us what the challenges are but also the pathway to get us out of the present challenges and all that is contained in the Atiku’s document,” Okowa added.