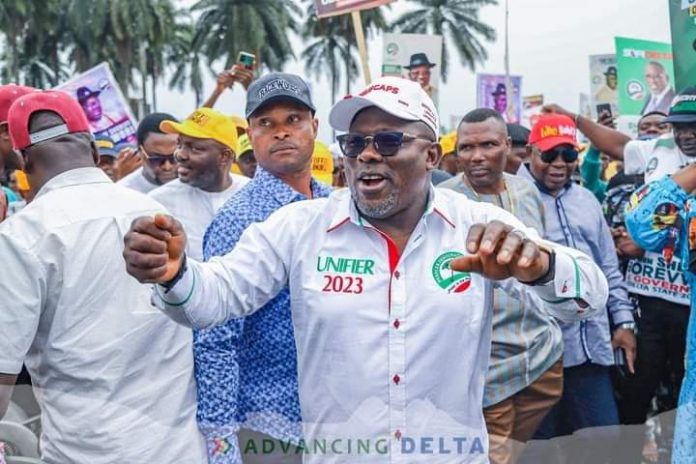 The first of the cases dismissed today was filed by one Chief Moses Ogbe on ground of alleged disqualification was dismissed by the Court which held that Chief Ogbe is a busy body and that he lacks the locus standi to challenge the nomination of Hon. Sheriff Oborevwori.

The second case was a claim by over 200 persons who alleged that they were not allowed to contest the ward congress elections.

The Court frowned at their attempt to mislead the Court and held that their case was stale and sratute barred.

The judgments delivered today in Ogbe v. Sheriff and Ejoh v. PDP., makes it a total of eight judgments in Oborevwori’s favour following his victory in the Governorship primaries.

The losing plaintiffs in both suits are the latest set of disgruntled elements to suffer disappointment as their attempts to use the courts to overturn the voice of the masses have come to nought.

Yet another set of two cases against Oborevwori and PDP are fixed for judgment tomorrow, Wednesday 6th July, at the Federal High Court Abuja.

Meanwhile, there is jubilation across the State reaffirming Deltans total and unrepentant support for the Sheriffied crooner, a unifier and candidate of the PDP, Rt Hon Sheriff Francis Oborevwori, JP, the Ukodo of Okpe Kingdom.