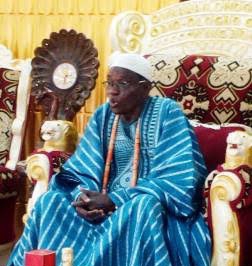 WARRI- The Odio-Ologbo of Oleh have been arrested over an alleged unlawful behaviors in Warri the oil city of Delta state by men of the Nigeria Police force headquarter, Abuja.

It’s on record that since November 2019, the Odio-Ologbo of Oleh has been locked in a perceived shameful battle with his own children over certain disgraceful events emanating from his household. According to sources in Oleh kingdom who are familiar with the issues, said all attempt to get peaceful outcome has been resisted by his own son Tony Uzezi who has collaborated with one Jubilant Igelige a palace chief in the community to frustrate every peace move due to their personal gains from the internal family crisis.

The monarch who was arrested after series of false allegations he has leveled against five of his own children and has subsequently refused to substantiate his numerous petitions written since he allegedly absconded his Oleh family residence with his Late Queen’s maid now playing the role of a wife.

The arrest of the monarch at his Ekpan hideout by the officers from Abuja, resulted to a distress call to the Unueworo of Ekpan, High Chief Victor Otomewo who pleaded with the officers on behalf of the Monarch not to be taken to Abuja by road due to his age after the Odio-Ologbo and his backers attempted to raise a false alarm to Ekpan youths that some men were trying to kidnap the Odio-Ologbo.

The false alarm was totally dismissed after the police officers identified themselves The Odio-Ologbo was later cautioned by High Chief Victor Otomewo who scolded the monarch that he had no right to resist arrest and that the police are conducting their lawful duties, therefore no one can stop them from effecting the arrest and that he should respect and follow them to the nearest police station.He was immediately taken to the Ekpan Police Station where his statement was obtained and his lawyer was asked to produce him alongside the other suspects in Abuja.

In an attempt to continue the frustration of his late wife, HRH Queen Eunice Ovrawah despite her demised. The traditional ruler allegedly went to a magistrate court in faraway Asaba to procure a court injunction to stop the burial of the Late Queen despite his total involvement in the planning stages with the extended families. Thus the casket intended for her burial was said to been kept inside the Late Queen bedroom pending the quashing of the court orders obtained. It went viral that he even went as far as swearing an affidavit in court that he was never involved with the funeral plans, despite sending representative to all the burial arrangement meetings in the person of Chief Henry Oyibo.

When our reporters put a call across to one of the Children Victor ovrawah, he told our reporter that the Monarch’s deceits and unnecessary show of force against his children will lead him to no where and as of today having attended four different serious reconciliation meetings with the Odio-Ologbo, he is not willing to attend any further reconciliatory meeting.

Some persons who are actually hungry and benefiting from William Ovrawah’s internal family crisis are the ones misleading him to fight his own children at his old age, they have seen the events as means of livelihood. .

Meanwhile Williams Ovrawah was asked to report to Abuja with his lawyer on the 18th of July 2022 unfailingly. All efforts to speak to the Odio-Ologbo and Adeola Ajigbotoluwa proved abortive as at the time of this publication