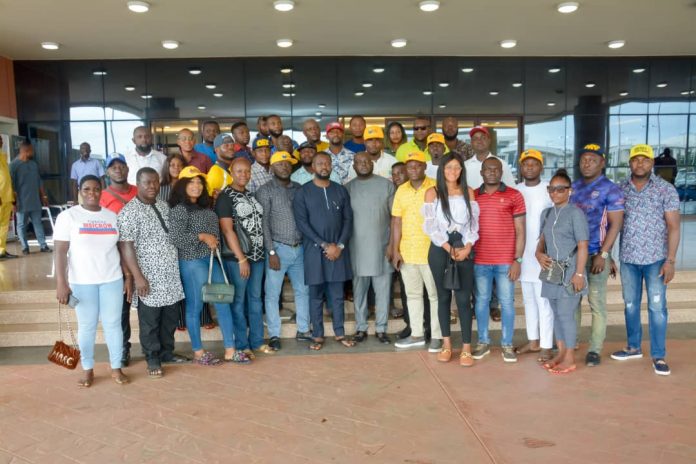 Ononye made this known through his Special Assistant Dr. Okuguni when the steering committee of More For Delta Youths Project led by Mr Fred Sheriff Junior Oborevwori met with him and the Senior Special Assistant to the Delta State Governor on Youth Development Barr. Ike Mmadumezie at the popular Prof. Chike Edozien State Secretariat Hall, in Asaba.

Okuguni stated that his boss Ononye is a die hard fan of sheriff who believes in equity and justice, rotation of power that has helped foster peaceful coexistence in the state and, as such declares his total support for Sheriff Oborevwori.

Going further , the SSA to the Delta State Governor on youth development Barr. Mmadumezie lauded the MFDYP initiative and declare his unwavering support to Sheriff’s governorship course adding that he’s confident that come 2023, Rt Hon Sheriff Oborevwori will be the governor of Delta state.

While thanking MFDYP for putting up this befitting platform made up of youths.

“This is a welcome development. Most especially, seeing how Delta youths across the state, decided to get involve in the political leadership enthronement process of our state.

I want to also expressed my satisfaction with the caliber of youths who are engaged in this project because majority of them are friends to me, some are my younger ones and, I believe in their capacity to mobilize for our great party PDP as I urge the group to extend this Project beyond the state politics in other to accommodate the Atiku /Okowa presidential aspiration and all PDP candidates across board”, he added.

Comr. Oghenemaro Eyanu while giving the vote of thanks to the duo for their warm reception, echoed the group support for Atiku / Okowa’s presidential bid amongst other PDP aspirant in the state.