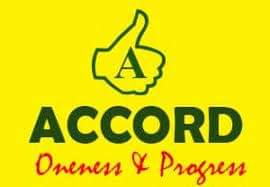 The Delta State Chairman of the Accord Party, Mr. Fred Obi has denied receiving $500,000 from any person or group of persons with the aim of trading its governorship ticket in the state for the 2023 general elections.

A statement signed by the chairman, said the party’s attention has been drawn to a mischievous social media publication by one faceless Fejiro Oliver claiming that, Accord Party Delta State is in some sort of alliance with the People’s Democratic Party in the state to field a gubernatorial candidate in the 2023 general elections.

“At first, we intended to ignore such ‘beer parlour’ illusion and cheap blackmail which we now understand the writer to be popularly known for, and avoid such calculated attempt to distract the party, but, necessity provides that we make a statement in that regards having been inundated with calls from party leaders and other stakeholders across the state.

“As a disciplined political party, we carry out our activities with every sense of respect to constituted authority but not ignoring that there are party organs that must be mostly respected in order to achieve a positive result in any given task.”

According to the party, in another separate allegation, the said writer  alleged that, an assumed $500,000 payment has torn the Accord Party apart saying; “This is laughable and intriguing as such allegation can only be born out of imaginary illusion from a drunkard’s dreamland lacking in evidential prowess. The Party is intact and remains one formidable force gearing towards the electioneering periods.”

Continuing: “Those claims are baseless, unreasonable, illusive and fragments of imagination of the writer. It is the handiwork of mischief makers as no such discussion or plan is in the offing as we write.”

However, the chairman noted that this also does not mean that the party door is closed should there be any opportunity for partnership or merger adding that, “as we make this statement, nothing of such.”

Obi maintained that the party is intact and remains one formidable force gearing towards the electioneering periods.

“It is imperative to also note that, the only recognised state structure of the party both by National Working Committee of the party and INEC is being chaired by Mr. Fred Obi which mid-wifed the just concluded, Local Government and Ward Congresses of the party, as well as, organised the party’s primaries ably supervised by INEC and other statutory agencies that have now produced all candidates in the various  positions across the state ahead of the 2023 general elections devoid of any form of rancour or fallout.”

The party advised the public to be weary of anyone parading his or herself as the state chairman as we do not have two Accord Party Chairmen in Delta State.

“Considering the political era, it is within the ambits of political parties to build bridges, form alliances and attract new members but, such should be done in mutual agreement expressed in decorum, and not given to premeditated assumptions of some unsrupulous minds whose aim is to explore such chances in order to score cheap politcal points.”

The chairman called on all political stakeholders, teaming supporters across the state and indeed the general public to disregard any form of unfounded allegations targeted towards ridiculing the image of the party.

“We also want to employ this avenue to advise the said author and his cohorts to hold fast in readiness to furnish the Court of Law the necessary evidence to back up such imaginary claims in his write up as the legal team of the party is already reviewing his piece with a view to approaching the court to seek redress.”