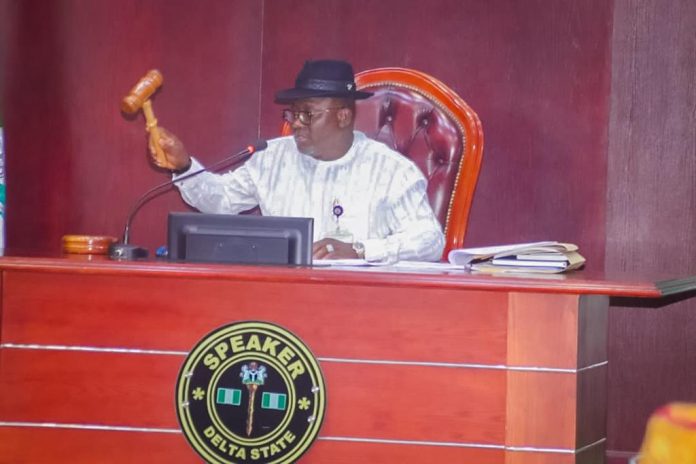 Three Executive bills forwarded to the Delta State House of Assembly by Governor Ifeanyi Okowa on Wednesday and Thursday this week scaled through various stages of legislative processes on the floor of the House with lawmakers voting in support of the bills.

While the bill to repeal the State Passengers Welfare Scheme Law was read the third time and passed, the Delta State Transportation Data Management Bill, and the Delta State Arbitration Bill, scaled through second readings after extensive debates on the merits of the bills by the Lawmakers led by the Majority Leader, Hon (Chief) Ferguson Onwo.

Opening debate on the Delta State Transportation Data Management Bill, Onwo
said its benefits to the state were enormous, explaining that the 29 clauses and 5 schedules proposed law is in line with the National Transport System Protocol being implemented at the national level by the federal government.

The Majority Leader pointed out that the bill is being domesticated as part of “Advancing Delta” vision of the state government, saying that besides life saving measures inherent in the bill bearing in mind the security challenges across the country, it will also provide data to formulate road infrastructure in the state.

He stressed that the bill was well drafted to make it reputable, and that the constitution of federal republic of Nigeria supports it, even as he commended the Governor for his foresight.

On the Arbitration Bill, the Majority leader, said the proposed law seeks to repeal an obsolete law which has existed since 1918.

Saying that the bill is to bring the law inline with present realities, Hon Onwo stated that the proposed law is not only cost effective but also saves time and encourages good will.

He described Arbitration as an alternative process of settling commercial disputes, maintaining that the bill was intended to promote peace, unity and development in the state.

The Bills enjoyed unanimous support of members as they agreed with submissions of the Majority Leader that the bills were people oriented and geared towards advancing Delta Project.

The Speaker, Sheriff Oborevwori commended the lawmakers for their vibrant submissions and referred the bills to relevant committees for further legislative actions.