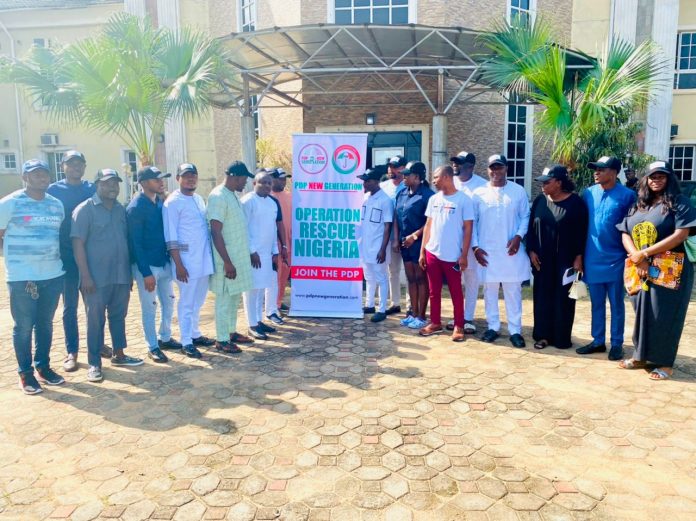 By Ear Adagbra- The People’s Democratic party PDP New Generation group has described the joint ticket of Atiku, Okowa as the for the country since it balanced the Religious equation of both Christianity and Islam which are the two major religion faiths in the country, just as they took a swipe at the Muslim- Muslim Ticket of the All Progressive Congress APC.

While at the same time the group in a Goodwill Message signed by the Delta State Coordinator, Honourable Efe Ani, congratulated the Governor Elect of Osun State,Chief Ademola Adeleke who they described as a Credible, resourceful and flamboyant leader who they also stressed has retrieve the alleged stolen mandate of the PDP.

At it’s enlarged meeting held in Asaba,it was declared that the Atiku and Okowa Ticket is the best which is needed for the developments of Nigeria at the moment.
The Delta State Coordinator of the group stated that Nigerians are tired of the suffering caused by the All Progressive Congress APC adding that the PDP is the only best available option to rescue Nigerians from the suffering caused by the ruling party.

Honourable Ani, urged Nigerians to support the PDP in the 2023; General Elections and stressed that any attempt to back the APC is will prolong their suffering which will be detrimental to the development of the country. .

“Nigerians are dying and we need experienced and trusted leaders to lead us, Atiku and Okowa are the only capable hands will need to rebrand Nigeria because we cannot afford to continue with the present suffering as a nation.” he said .

In a related Development the group also congratulated Senator Ademola Adeleke the Governor Elect of Osun State who they described as Credible, resourceful and flamboyant leader.In a Goodwill Message signed by Honourable Efe Ani Delta State Coordinator of the body describing his victory as resounding and well deserved.
Adding that it was not only a sign that he his the People’s choice but also a competent leader that will lead Osun people to the promise land. Adding that his victory goes to confirm the retrieving of his stolen mandate sometimes ago.

According to the group Senator Ademola Adeleke’s track records over the years has prepared him for the task ahead.Adding that after his inexplicably Lost in 2018 he has consistently enlarged his coast across the length and breath of Osun State.